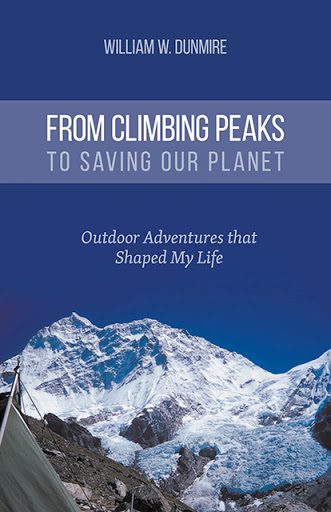 From Climbing Peaks to Saving Our Planet
Outdoor Adventures that Shaped My Life
by William W. Dunmire

With a light, often humorous hand, Bill Dunmire traces his fascinating experiences during the outdoor adventures that shaped his life. He began as a serious climber of mountains throughout the world before spending twenty-seven years with the National Park Service as a Park Naturalist in five national parks and a Park Superintendent of two. Those assignments included witnessing spectacular volcanic eruptions and a deadly tsunami at Hawaii Volcanoes National Park, watching wolves capture moose at Isle Royale National Park in Michigan, enjoying back-country ski adventures at Yellowstone, and facing down his Department of the Interior bosses at Carlsbad Caverns National park in New Mexico. He followed his NPS career by serving as a field biologist for The Nature Conservancy in New Mexico. Written in lively prose, From Climbing Peaks to Saving our Planet will keep outdoor enthusiasts spellbound. Spectacular color photographs illustrate each chapter, drawing readers into the action as Bill’s stories are brought to life.

A graduate of the University of California, Berkeley, with degrees in wildlife management and zoology, Bill Dunmire served twenty-seven years in the National Park Service as a Park Naturalist and later as a Park Superintendent. His assignments included Yosemite, Hawaii Volcanoes, Yellowstone, and Carlsbad Caverns. He’s currently an Associate in Biology at the University of New Mexico and a Research Associate at the New Mexico Museum of Natural History and Science. An author of six published non-fiction books, his most recent book is New Mexico's Spanish Livestock Heritage: Four Centuries of Animals, Land, and People. Over the years, he has given more than three hundred public lectures about his books throughout the Southwest. Bill lives with his wife, Vangie, in Albuquerque, New Mexico.