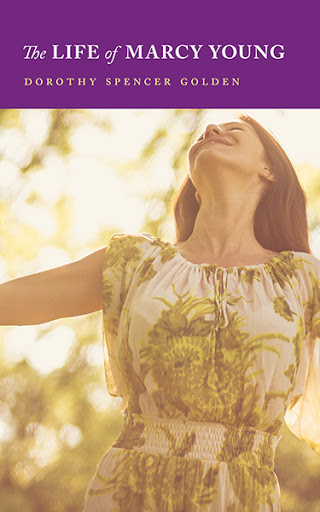 The Life of Marcy Young
by Dorothy Spencer Golden

When her beloved grandmother is hospitalized with a grave heart condition, Marcy Young returns to her hometown of Masonville, Ohio to be with her in her final days.

Once there, she learns a shocking secret: her grandmother has amassed a multi-million dollar fortune, and Marcy is the heir. Moving into her grandmother’s former residence and taking up a new career, Marcy focuses on putting her new wealth to good use by giving back to the city and people of Masonville. Her generosity leads her to love, family, and friendships within her new community.

A heartwarming story of faith, hope, and love, The Life of Marcy Young covers themes of a bygone era and highlights the importance of respect for one’s fellow man, honor, and admirable work ethic.

The author, an avid reader, is a native of Louisville, Kentucky. She grew up in a family in which music, art, poetry and literature were valued. Her dad could often be heard reciting Longfellow or singing arias from some of the world's greatest operas. By the time she was four years old she, along with her older sisters, was reciting Paul Revere's Ride as well as The Night Before Christmas. She became an elementary school teacher in the Jefferson County (Kentucky) Public School System at a time when music education was part of the daily curriculum. She later co-authored curriculum guides and worked in supervisory and administrative positions. She retired from the school system several years ago after having worked in several positions for nearly thirty years. Her intention at that time was to write children's books.