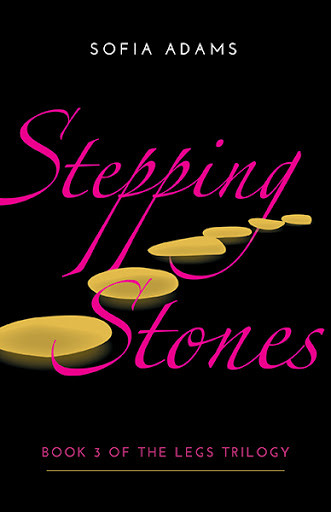 SOFIA ADAMS' Stepping Stones is the shocking conclusion of The Legs Trilogy. The ugly truths that have plagued Suzanne Thompson and Robert LeClure in Adams' previous books, Legs and She, Who Kissed His Feet, are finally exposed!

The saga novel continues with Suzy awaiting the acquittal of the murder charge filed against her for killing her husband, Sam, and the miraculous birth of her deceased stepson’s baby!

With a large inheritance left to the baby heir, appointed guardian, Chloe Sprangers, must take drastic measures to ensure the baby’s safety. But are her actions enough to detain a vengeful drug supplier from reclaiming the money he thought to be his own?

These Traverse City families have turned their backs on each other with lies and deceit, starting with a suicide that rocked Robby’s world. Darkness has plagued their lives with mental illness, abuse, murder, and revenge… can their raw emotions ever result in forgiveness and survival?

Stepping Stones unfolds the long awaited truths and reveals some of life’s greatest lessons along the way.