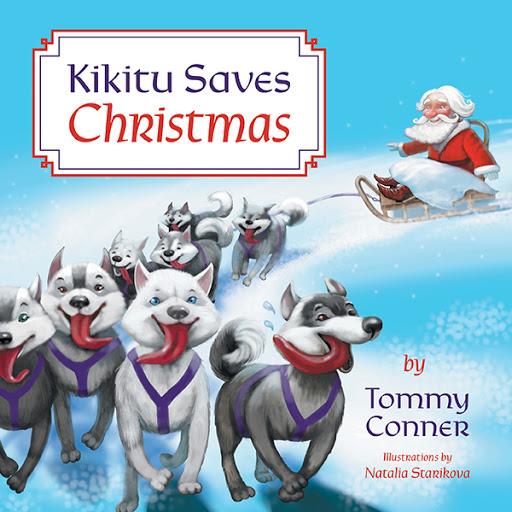 It was a normal December day for eleven-year-old Yuka, who was out for a ride with her sled dogs. That is, until something red, white, and black fell out of the sky. Much to her surprise, that something turned out to be someone – Santa Claus! Sheepishly, Santa admitted he hadn’t been wearing a seatbelt and fell from his sled when it made a tight turn. The reindeer didn’t even notice.

But what is he going to do? It’s the day before Christmas, and Santa is lost and far from home. Without reindeer to get Santa back to the North Pole, Yuka knows there is only one solution. She puts her lead dog Kikitu in charge of getting Santa back in time to save Christmas. But the journey won’t be easy. In order to get to there, Kikitu and the other dogs must first avoid the clutches of Tatuk the polar bear, the dangers of thin ice, and a terrible storm. To succeed will take strength, skill, courage, and of course, a little Christmas magic from their very special passenger.

Kikitu Saves Christmas is a magical, exciting Christmas story that also offers the opportunity to learn about Inuit culture, animals of the North, and the secret life of a very special sled dog.

Author Thomas Conner first dreamed up Kikitu and Yuka’s Christmas adventure for a university writing course project. But like many good stories, it took root and grew into a book. Thomas says he writes because he likes the process, and more importantly, he writes to entertain.

Thomas was born in Scotland but moved to Canada where he worked as an engineer. He enjoys winter outdoor activities (like Yuka!) and, of course writing. Kikitu Saves Christmas is his first book for children. Fans of Kikitu and Yuka will be delighted to learn that they will be back soon in a new adventure. Watch for Kikitu and the Secrets of Waruk’s Lair, Book Two in the Kikitu series coming soon.