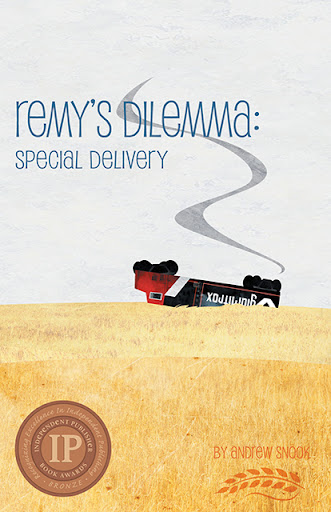 In Book II of the Remy Delemme Series, Remy finds himself detained in Prince Albert, Saskatchewan, arrested for crimes against the Glamerican government. To earn his freedom and avoid incarceration, a confused yet cooperative Remy is forced to work as a shadow agent for the government. Unfortunately for them, Remy isn’t the criminal genius they pegged him for (nor is he even a regular kind of genius), and he inadvertently sets off a series of events that could spell doom for the entire world. Meanwhile, Toronto police detective Tobias Gray attempts to track him down and rescue Rose Maheen, the love of Remy's life who has mysteriously gone missing. Along with a cast of wickedly funny characters, including a grizzly moose addicted to maple beans and a retired curler turned philosophical hobo, the bumbling but ever-endearing Remy sets off across Western Canada on the adventure of his life, encountering exploding museums, train derailments and chaos galore everywhere he goes.

Andrew Snook has been working as a professional writer for ten years, first as a newspaper reporter in the Ottawa area and later as a magazine editor and feature writer for a variety of business publications. He started writing fiction while attending university in Nova Scotia, and this book was written while he worked on the road across all ten provinces and The Yukon, in sixty-two towns and cities. His work has won him some professional writing awards, which is neat, but he’s actually happier knowing his fiction made someone laugh out loud at an inappropriate moment. His first book in the Remy Delemme Series was published by FriesenPress in 2015. He lives in Mississauga, Ontario, with his super-amazing wife, Cristine, his three awesomesauce kiddos Emily, Sofia and Sebastian, his two dogs, Merlin and Leela, and Pepper the fish.