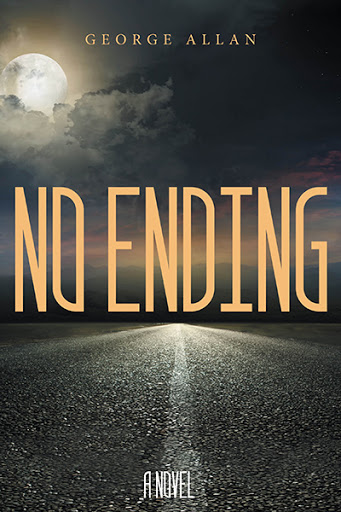 No Ending
by George Allan

No Ending is a layered murder-mystery featuring a classic hard-boiled detective with a twist—lead detective Frank Gennaro is the brother- in-law of the latest victim of what may or may not be the work of a serial killer. And he just might have been having an affair with Holly Baker, his sister-in-law, discovered dead at the novel’s outset. At once the lead investigator and a potential suspect, Gennaro is emblematic of a plot loaded with deception, subterfuge, and intertwined relation- ships that fail to adhere to conventional social boundaries. The novel features an ensemble cast of shady players, broken families, a team of hardened murder cops, and a very crafty, game-playing serial killer. Readers are immersed within a particularly violent, distrustful, and dark contemporary view of America. With an enormous cast of interconnected characters straight out of central casting and every one of them sporting one secret or often a dozen, No Ending leaves readers guessing right to its actual ending.

“Gennaro sat back. His experience told him that he had just rubbed against something diabolically evil. It was rumored that sex slaves were being brought into the city. Now he had a smidgen of the truth. The world was getting smaller. Blame it on the internet? Racism? Politics? The twelve-year-old girl clinging to a stick-woven raft in the Mediterranean or the Pacific didn’t care. She wanted to live. That’s all. How basic can that be? A life fighting for a life – not to be channelled through endless routes and endless pain for the pleasure of men. For the money of men.”

George Allan’s work as a writer includes articles for several Canadian magazines, stage plays, and television writing, including situation comedies, and dramas for the Canadian Broadcasting Corporation. He is a charter member of the Writers Guild of Canada.

No Ending is Allan’s debut novel. Researching the book, he spent time on the street with detective units and uniformed law enforcement personnel in Toronto and Vancouver. Allan lives in Southern Ontario with his wife, Katherine.