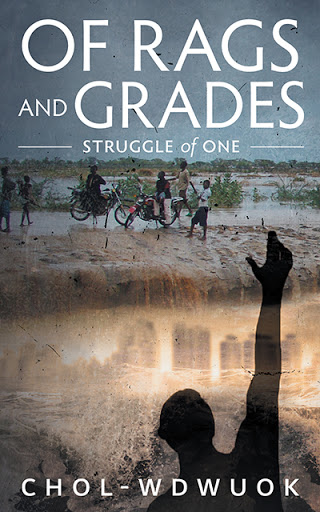 Of Rags And Grades
Struggle of One
by Chol-wdwuok

Newly arrived in Kakuma Refugee Camp, adolescent Chelow has left much of his beloved family behind in South Sudan. With his brother and cousins for company, he gradually adjusts to the sometimes harsh camp life with good humour and a growing sense of duty to fulfill promises he has made to his family. Once Chelow sets his sights on a goal, there’s no stopping him (though the pretty girls in his class are a tempting distraction). But with fierce competition and many other students scrambling for the coveted top rankings at school—a near-guaranteed way out of the camp and on to a brighter future—Chelow has his work cut out for him.

Staying up all night to study and working evenings and weekends as a bike-boy shuttling passengers in and between the camps, sometimes only fueled by one meal a day, Chelow’s hard work eventually pays off. He is offered a place in a prestigious high school and finds himself waving goodbye to family, friends, and community in search of a different life. He never loses sight, however, of the incredible odds he has beaten to get where he is. Of Rags and Grades is a meticulously-told labour of love detailing the life of one boy struggling against facelessness to build a name for himself and make his family proud.

Chol-wdwuok is an author born in Jonglei State, South Sudan. As a boy, he moved Kenya to pursue education, where he attended the Kakuma Refugee Schools and later earned a Jesuit Refugee Scholarship to the Katilu Boys Secondary School.

After his high school studies, he then applied to and was accepted into the World University Services of Canada scholarship and attended the University of British Columbia, where he graduated with a bachelor’s degree in Mathematics and Economics. He is also the author of Angels in Swollen Crises: Stepmother.

He lives in Vancouver, British Columbia, where he owns Construction Business, and enjoys reading, and sports afterhours.