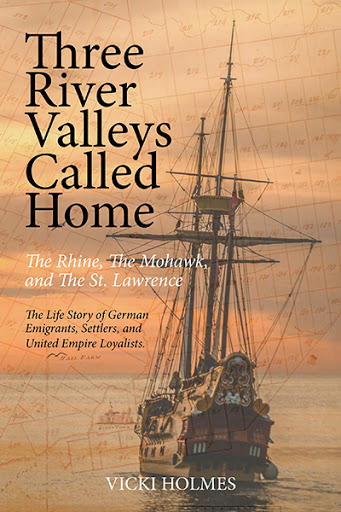 Three River Valleys Called Home
The Rhine, The Mohawk, and The St. Lawrence
by Vicki Holmes

Sometimes people leave their home with the hopes of finding something better. Sometimes they are forced out and chased away. Philip Eamer and his wife, Catrina, experience both in this true story of immigrants searching for a place to call home. The Eamer family’s story begins in 1755 as they leave the Rhine Valley for a better life in America. Once there, they move to the Mohawk River Valley in New York, where they build a home and raise 10 children. Despite the effects of the French Indian War, the Eamers flourish and happily find their lives intertwined with their neighbours and fellow immigrants for almost two decades.

However, no family’s story occurs in isolation, and eventually the Eamers find themselves at the mercy of the political and historic events of the American Revolution. Choosing to side with the Crown, they are forced to flee their home at the hands of neighbours and soldiers. What follows next is representative of many Loyalists’ experiences. The Eamer family is forced to make a 370-km (230-mile) trek to Montreal, where they must live in a refugee camp for three years before finally being granted their own land in the St. Lawrence Valley for their loyalty to the King.

Told by one of Philip and Catrina’s descendants, Three River Valleys Called Home is historical fiction based on a real family and true events. Although some of the interactions and dialogue may be imagined, they are firmly planted in the harsh realities that many immigrants faced and pay tribute to the true grit of the settlers who built North America. While this book will have special meaning for the thousands of descendants of the Eamer family (and the other families who made up their community), their story will touch anyone with a history of immigration in their family tree.

Vicki Holmes is the 6th great granddaughter of Philip and Catrina Eamer. She notes: “I’ve always had an interest in my family’s history and genealogy...and in history in general, but particularly that of Upper Canada, Mohawk Valley, and the United Empire Loyalists. I am a curious person with an active imagination that needs an outlet, and I love to write.” In fact, Vicki spent 25 years investigating the Eamer family and another eight years researching the history and sources for this book. Her work is evident in the incredible amount of interesting primary sources, illustrations, photos, and charts woven throughout the book.

A retired nurse educator, Vicki lives in Edmonton near her family. She enjoys spending time with her dog and two horses. Three River Valleys Called Home is her first book.