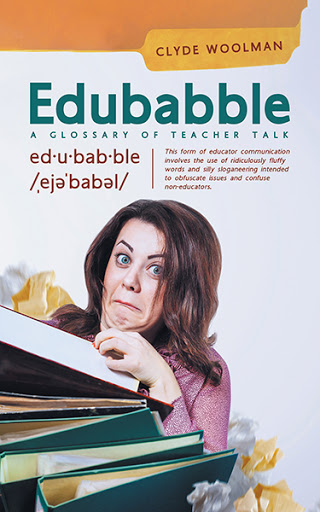 Edubabble
A Glossary of Teacher Talk
by Clyde Woolman

“Nobody would believe this stuff .” This staff room refrain was usually in response to the verbiage or antics of children or teens, the nonsensical decisions of those in the education bureaucracy (including myself), or the fatuous comments that emanate from education professors or politicians trumpeting the need for change in public education. From Latin to Robotics, Politicians to Principals and Hot Dogs to Nourishment; from Football to Dances and Psychobabble to Counselors, the jargon that makes teaching such a special profession, and the shenanigans that make school such a unique workplace, are highlighted and lampooned.

Edubabble — This form of educator communication involves the ridiculously fluffy words and silly sloganeering intended to obfuscate issues and confuse non-educators. Colleague reaction to edubabble is antithetical. Some teachers roll exasperated eyes and snort derisively while others nod deferentially to those proficient in its use; see Curriculum Coordinators, Expert, Inquiry-Based Learning, Leading Edge, Quest for Excellence, Robust, Visionary, Yappers (2).

Clyde Woolman has been a teacher and counselor, a principal of an elementary, a middle and three high schools; and completed a six-year hiatus as a Superintendent (CEO) of a school district before reengaged neurons led him to voluntarily announce a return to a school. At one time or another he has been involved in education from Kindergarten through to the university level. He has delivered keynote speeches at conferences, sat on panels, presented workshops and seminars, and led teacher and principal teams when reporting on schools. Instead of incessantly talking about the trials and tribulations of teachers and schools, he decided to compile this glossary as a tribute to those adults working and supporting the students in their care.

Also written for teachers is Hepting’s Road: A Novel of Teaching (FriesenPress 2018). Woolman has also published two adventure novels for children 10-12 years old, released by Moosehide Books: Yurek: Edge of Extinction (2013), and Smugglers at the Lighthouse (2010).

Go to www.clydewoolman.com for more information.