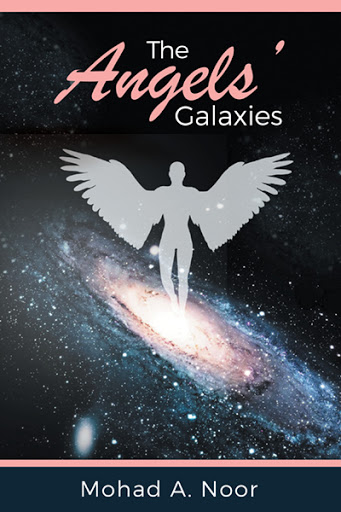 The Angels' Galaxies
by Mohad A. Noor

Here is a thrilling, charming text about believing in the power of angels, and taking comfort from their enduring presence. You will be entering the domain of Archangel Michael and Angels' Galaxies. There are Seven Thrones in the Seven Galaxies, each ruled by an Angel King or Queen.

Angel Jennifer is the cheery and kind princess from Throne three. Life is all good for the angels: they have duties to perform and focus all their attention and powers towards transcending to higher thrones as they grow in rank. But peace never lasts for long, and everything comes to a halt when Demon King Saty is killed by his son. All of a sudden, eternal peace treaty is compromised, and the demons begin to attack angels under the command of their new King Kaly.

The stakes are high and danger lurks in the air, but with her friends by her side, and the violet-eyed Prince Justin there to accompany her, Jennifer might just be able to succeed in the task she is given.

"The book is really good!"

"It is a tremendous book."

"It is a great reading!"

"This book is an intriguing read with many well thought out characters. The writer is able to utilize his passion for angels and his imagination for other worldly experiences to create a memorable read." - Serena Meharchand

"An amazing book with true dedication to the angels!" - Tyler Neil

It was my mother’s saintly features and affection that made me look for angels everywhere I went. She taught me to see what was beyond our realities. Mother, you might not be with me today, but you will always remain a part of who I am. This book is for you.

The idea for this book came to me from a personal experience. It happened on one bright, sunny day in July when I was visiting my in-laws’ cattle ranch. I love visiting that place; it is always peaceful there. That day, I was enjoying the calm in the air as the farm animals grazed on the grass inside their white picket fence. I was on the east entrance, mending the broken fence when I saw my wife enter through the south entrance with my two-and-a-half-year-old daughter Phianna, to watch the cattle up-close.

My wife June, along with my daughter, was walking towards the animals and was just 60 feet away when the cattle noticed her. It usually doesn’t happen but that day, for some reason the cattle got alarmed and the next thing I know, the herd of cattle was stampeding towards my family.

I don’t know when I dropped my hammer or shouted their names; I just know that I was sprinting towards them fast to come between my family and the thirty animals charging at them. As soon as she noticed that something was wrong, June turned around to run back in the direction she came from in order to escape the stampede.

By this time, I had reached the space between my family and the cattle, but what I was supposed to do next was beyond me. I had just followed my instinct, but now that I was standing there, looking at the charging herd of cattle 25 feet away from me, I realized that there was nowhere for me to go.

Just as I thought that this was going to be the end of me, something most incomprehensible and surprising happened to me. I saw this bright rushing light come towards me and the pounding cattle, and all of a sudden they halted.

They just stopped mid flight, as if an Invisible wall has been placed in front of them. In order to get out of their way, lest they decide to run once again, I quickly moved towards the east entrance, half expecting the cattle to come towards me, but they didn’t move a muscle.

Amazed by this turn of events, I looked back at my wife and was relieved to find her safely behind the fence and out through the south entrance. At that moment, a surreal feeling washed over me, as if a presence was departing from beside me. The cattle were still frozen on their spot, looking at me.

I still can’t comprehend what really happened that day, but it made me believe even more strongly that there is always some outside force looking upon us and protecting us. Perhaps it was my guardian angel, maybe it was Phianna’s, but on that day, I decided I will write a book about them.

I thanked the Lord for sending this help to us and for keeping me and my family safe.

At last, I would like to thank my readers for giving this book a try. I hope you all find happiness and learn to defeat your demons under the watchful guidance of your angels.