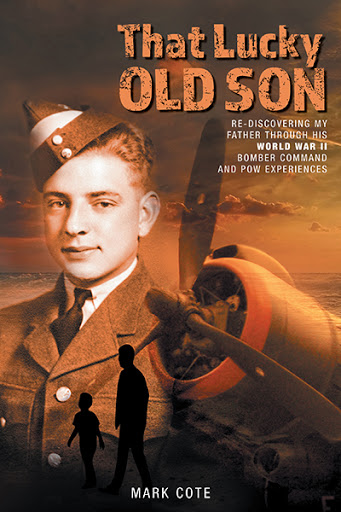 A moving work of autobiographical fiction, That Lucky Old Son takes readers on a journey of adventure, danger, and self-discovery as the author weaves his own memories with his father’s experiences in Bomber Command with No. 158 Squadron RAF during the Second World War. Writing from a child’s point of view, Mark Cote combines known facts with what he imagines his father doing from basic training through to being shot down and captured by the Germans. He poignantly communicates the terror, uncertainty, and fleeting hope felt by the crew, transporting readers back in time to 1940s Europe.

Having lost his father when he was only eight years old, Cote embarks on a quest to discover the man who left him too soon, but who left behind a legacy of courage, love, and faith. That Lucky Old Son is a book that will educate, inform, move, and inspire readers of all ages.

"For historians, World War II buffs, and veterans’ families, this book offers a unique take on world events at the micro level. 'That Lucky Old Son' is not to be missed."

-Foreword Clarion Review (5 out of 5 stars)

In his first book, Mark Cote captures the emotion and essence of the period he aptly recreates. A trained researcher and academic scientist, Cote has devoted his professional life to teaching and learning. He holds an M.Sc. in Geography with a specialty in atmospheric sciences, and has taught numerous courses in Geography and Environmental Science. Cote is an Associate Member of the RAF 158 Squadron Association and his interest in aviation history has led him to visit numerous air museums including those housing restored Halifax bombers. This suits his passion to dig into archives and create stories from disparate facts.

Mark Cote and his wife, Shelley, live in Regina, Saskatchewan, where the author grew up and where the couple raised their only child—a son named after the author’s father.

That Lucky Old Son has been nominated by our staff as one of their favorite books.