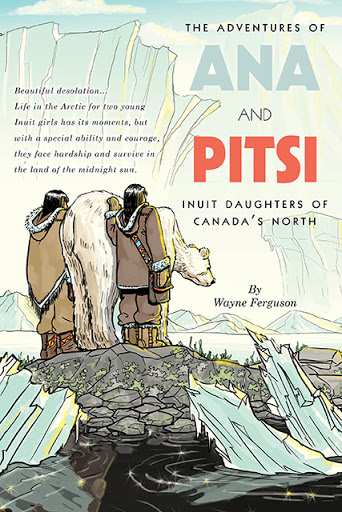 The Ana and Pitsi series of stories are written to be enjoyed by children and parents alike. The stories take place in the barren lands of northern Canada. The North West Territories are cold and uninviting, but have been the home to people who have learned to survive and thrive in an environment that most would find impossible.

It is in this land where two little Inuit girls, Anana and Pitsiark Oglukark find themselves with a certain ability that allows them to become more a part of the world they live in. Follow their journeys as they travel through the frozen land of their birth. They have no Shopping Malls, pretty dresses, sleepovers, cell phones or dancing slippers. What they have each other, their family, and a Polar Bear named Koluk.

We hope you enjoy a book that is not of Fairy tales and pink elephants, but of people who live and love on the shores of the Beaufort Sea. The stories attempt to create, as the old cliché goes, ‘a movie in your head’ and an appreciation of a life that few fortunate humans have experienced.

Life in the Arctic for two young Inuit girls has its moments, but with a special ability and courage, they face hardship and survive in the land of the midnight sun.

Wayne Ferguson, who has published over 200 short stories in various small town newspapers, as well penned several screenplay and scripts over many years, has finally turned his attention to books. Whether ending up on a shelf and forgotten, or well-worn and tattered, a book can become a friend, or even create friends.

The Adventures of Ana and Pitsi has been nominated by our staff as one of their favorite books.