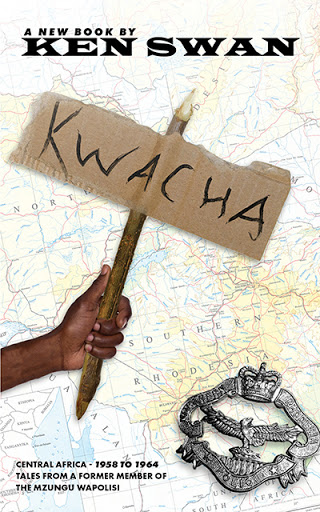 England, 1958: Young Higgs is a hard-working motorcycle mechanic in Milton-Keynes. The entire country is generally cold and damp. There’s got to be more out there for a man with his ambition. The future looks grey. Until he picks up the paper over a pint one night in The Carrington Arms.

A phone call, some paperwork, and a few handshakes later, Higgs is aboard the R.M.M.V. Carnarvon Castle bound for Cape Town. The next three years see this handsome young ladies’ man get to grips with British law enforcement on the African continent; a rather different affair to the bobby-on-the-beat procedures of home.

Cue hilarity, horror, and harrowing tragedy as Higgs builds a life of remarkable proportions as an officer of the Northern Rhodesia Police Force. Based on the true lives and stories of original NRP officers, Kwacha is both a fun-filled tale and an important historical document that captures and preserves a world order fast fading from living memory.

A career as a Policeman in Central Africa, at the height of colonialism, is no longer possible. These events will never be repeated in history. Excitement, Intrigue, murder, sabotage, international political subversion and a lot of fun. This book describes it all, in detail.

Ken Swan grew up in Africa and become a member of the Northern Rhodesia Police, as a young man, in 1959—a time when international powers all looked to mineral-wealthy Africa as an objet de désir. Within five years, Northern Rhodesia would become independent of British rule, and nearly 1,000 ex-pat police officers lost their jobs. While it might have been considered a tragic ending for many of those men, Swan is philosophical: “Put a bunch of mostly twenty-year-old men together; throw in fast cars, motorbikes, and parties; and the life was worth the ending. The going up was worth the coming down.”

Ken now lives in White Rock, British Columbia, with his wife of fifty years, Helene. There he enjoys the city, writes novels, paints and travels abroad. Kwacha is his second published book—based very much on truth.