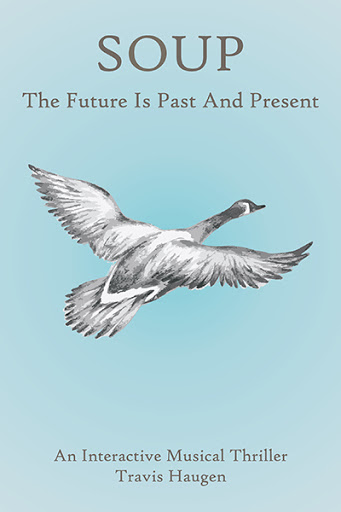 Soup
The Future Is Past And Present
by Travis Haugen

Scott Yonge exploded onto the national consciousness at the 2001 Garrett Awards and quickly rose to legendary status on the wings of his music and his whirlwind romance with independent film actress Michelle Zoe. What should have been a perfect life was interrupted by an ultra-right wing militant group called the American Freedom Force and its leader, Colonel Randall, who forces Scott to choose between his life and that of his son. After his heroic sacrifice, his family is left to pick up the pieces and forge ahead to a future in the vacuum he left behind.

Now, in 2021, his son Hedley inherits music for himself, becoming a star in his own right as technology gives new life to the medium. Scott’s daughter, affectionately known as Soup, throws herself into unravelling the mysteries of her family’s history. Michelle commits herself to keeping them all together and trying to make sense of life without the one she loves. Through it all, the AFF looms in the shadows, threatening to resurrect the pain they have just begun to overcome.

In the first of his new series, Travis Haugen explores the reaches of the near future through his love of music, technology, and the unbreakable bonds of family. This book includes access to twenty-four original songs created by the author to bring the story and its characters to life.

Following is an official OnlineBookClub.org review of "Soup" by Travis Haugen:

Soup: The Future is Past and Present by Travis Haugen is "an interactive musical thriller.” Musician Scott Yonge is thrust into the spotlight after receiving the 2001 Garrett Award. After his whirlwind romance with actress Michelle Zoe, the couple's idyllic life is derailed when Scott is targeted by Colonel Randall, the leader of an extremist militant group, The American Freedom Force. Forced to choose between the life of his son and his own, Scott makes the ultimate sacrifice for his family.

Fast forward to 2021; Scott's family members each deal with filling the void from his absence differently. Michelle struggles to protect her children as they become young adults. Their daughter, Carolyn--nicknamed Soup--seeks answers by researching her family's history. Their son, Hedley, who is also a musician, is becoming a star through the advances of technology. Meanwhile, AFF is still a threat--can the family find the peace that seems to elude them?

The book spans 273 pages with a timeline ranging from 1967 to the near future in 2021. As a professional musician for 40 years, the author draws from his experiences recording in studios and touring in Canda and the US. The multifaceted plot is intended to interact with 24 original songs; the links to the music and addendums from the Soup website are included in the book.

There is a lot to like about this book. First, is the cast of well-developed characters centered around the Yonge and Zoe families. I appreciate the inclusion of strong female characters portrayed by Michelle Zoe Yonge and her daughter, Soup. Scott Yonge and his son, Hedley, are musicians characterized by depth not typically associated with the rockstar persona. As the first in a series, the book includes detailed generational history and establishes sufficient background for future sequels.

The complex plot involves a timeline that moves fluidly between different interims in the past and present, which in this book, is the near future. While I don't want to reveal any spoilers, I found it comparable to watching a suspenseful movie that requires not taking your eyes from the screen to fully grasp the plot. It must be read carefully, but with such engaging storylines, it's easy to become engrossed.

I most liked the interactive aspect of the book. The author is a musician writing about musicians, and when the songs are mentioned, links are provided to listen to the music. I found that listening to the songs enhanced the enjoyment of the book. The author did an excellent job of formatting the material. I found no glitches or complications; listening to the provided music and returning to reading is as simple as clicking on the colored links. I also enjoyed the cover art and other featured sketches by illustrator, Haley Craw. Readers will appreciate the significance of the Canadian geese as the story unfolds.

Initially, I had to adjust to the book's chronology. In some regards, the plot almost works backward; the reader is presented with conclusive information, and it takes time for the backstory to be pieced together. The first several chapters introduce a lot of information, and in the beginning, I found the influx of events from different dates a bit confusing. However, as the story continues to unfold, more of the pieces fit together. The fluctuating timeline bears noting, but overall, it didn't detract from my reading enjoyment. I'm pleased to rate this book 4 out of 4 stars and look forward to reading future books in the series. I recommend it to readers who enjoy complex thrillers. It will also appeal to music fans and those interested in near-future technological advances.