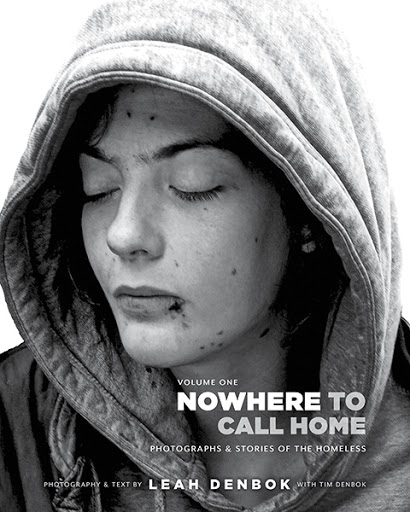 Nowhere to Call Home: Volume I
Photographs and Stories of the Homeless
by Leah Denbok

“I invite you to look into the eyes of the homeless… they tell a story.”

Homelessness is a serious problem throughout North America—even in Canada and the United States, two of the richest countries in the world. “We must stop this madness,” says Leah Denbok, the teenage Canadian photographer who travelled with her dad for over two years to cities throughout North America, photographing and interviewing the homeless. Leah was inspired by the story of her mother, who at three years old was rescued from the streets of Calcutta by Saint Teresa (formerly Mother Teresa). Nowhere to Call Home is a collection of gritty, black-and-white photographs and the personal stories of individuals who live on the streets. The haunting beauty of the images will stay with you, long after you turn the last page.

All the profits from the sale of this book will go to the Salvation Army Barrie Bayside Mission Centre.

“Leah’s striking photographs sent chills down my spine. If we allow ourselves to be vulnerable to these stark and haunting images, soon we find that they are our aunt, our neighbor from down the street, a childhood classmate—they are us and not ‘the other’. She has truly captured the beauty, joy and pain of what it means to be human—a trait which, incidentally, we all share in common. I find it equally compelling that a 16 year old from Collingwood, Ontario would choose to take the time to capture the narrative of the invisible and make them visible.”

Leah Denbok has been taking photographs since she bought herself a used Canon EOS Rebel T2i from a local hockshop in the summer of 2012. Inspired by the work of British photographer Lee Jeffries, she has been concentrating on high-contrast portraiture. One of her photographs was awarded first place in the Blue Mountain Foundation of the Arts Juried Art Show. She was recently the subject of a mini-documenary that aired on CBC’s ‘The National’. Leah is thankful for the mentorship of National Geographic photographer Joel Sartore. “Without his encouragement,” she says, “this book would have only been an idea.” Through her photography, Leah wishes to help humanize the homeless and draw attention to their plight. She lives in Collingwood, Ontario, with her parents, Sara and Tim, and her older brother, Daniel.

To see more of Leah’s photography, visit her website at ldenbokphotography.com.

Nowhere to Call Home: Volume I has been nominated by our staff as one of their favorite books.