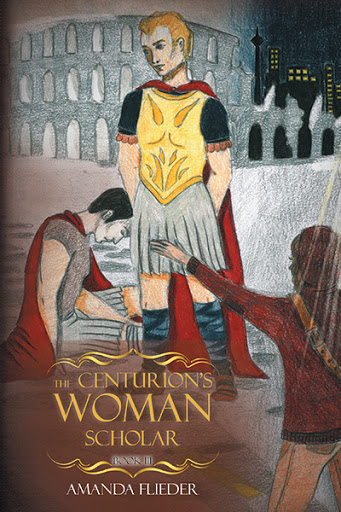 Twenty-first century survivalist, Alexandria “Alex” Moldovan, is on a march to Illyria with Minerva’s 1st Legion – in ancient Rome. Her guardian, friend, and her husband’s commander, First File Verus Celsus Calix, has been gravely wounded beyond the rudimentary methods available … but can she provide modern medicine? With time running against her, and her husband’s trust running out, Alex races to hold together the past without destroying her future.

First File Ixillius Traversi had not planned for his current responsibilities as acting Legate when he’d envisioned his promotion. He wasn’t born to the social class required to maintain a marriage within Alex’s high-ranking family, or to fully implement the military office that Verus had forced on him. Now he has to keep his wife safe by keeping her a slave, and hold together a Legion close to open revolt, hopefully arriving in Verona before Minerva’s 1st is reduced to a mob.

The Centurion’s Woman concludes in this third book, Scholar, with Minerva’s 1st on the march to Illyria and the rebellion that is waiting for them if they arrive …

"You have again written a fine story with an amazing cast of characters, including some very strong female characters. There's some great wit and humor sprinkled throughout. It's a fine tale of treachery, greed, corruption, lust and love. Great Combination!" - Author and Editor, Mary Metcalfe.

When she is not immersed in the imagined world of her characters, multi-published author Amanda Flieder works and lives in Edmonton, Alberta. Scholar completes The Centurion’s Woman trilogy, started in Maiden and continued in Warrior.