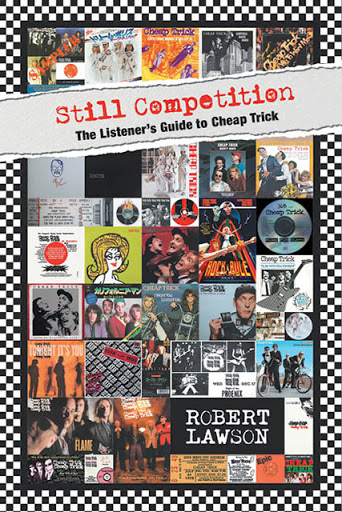 Following the success of his 2016 book Razama-Snaz! The Listener’s Guide to Nazareth, Robert Lawson returns with this meticulous reviewing of every Cheap Trick album, song by song. In his book, Still Competition: The Listener’s Guide to Cheap Trick, Lawson outlines the band’s significant television appearances, live shows, and more with the attention to detail only a super fan could provide. A dedicated follower, Lawson has assembled this reference guide out of a love of music and a dedication to fellow fans, but he is not without criticism (often humourously so) when the rockers fall short of his high expectations. He shines the spotlight indiscriminately, which makes him all the more credible a witness to the band’s lengthy career. Lawson also seeks input from some of the world’s greatest Cheap Trick and classic rock fans, who share stories from epic live shows. Fellow classic rock devotees will love this manual on Cheap Trick’s highs, lows, and everything in between.

Hugely knowledgeable fan of classic rock Robert Lawson has discovered a new form of rock bio with his Nazareth book and now this towering work on Cheap Trick.

"Still Competition" synthesizes, makes readable and pleasing to the ear and intellect everything you needed to know about the Cheap Trick albums in order to fully appreciate the intense listening sessions that are sure to follow one’s effortless read.

Lawson creates love letters to these artists’ material but with substance, his reverence for the band's catalogue resonating and ringing loudly on his packed pages.

Cheap Trick never seemed to get their just deserts. With Robert Lawson's "Still Competition" maybe we are seeing a change in the weather. Here is a look at the band's history going though each album, documenting the impact of the music. A fun read and great primer for Cheap Trick's discography. Recommended.

Robert Lawson is a lifelong music fan and collector. He works as a record store manager. He reviews music, movies, and more on his website www.thissideofthetracks.ca. This is his second book.