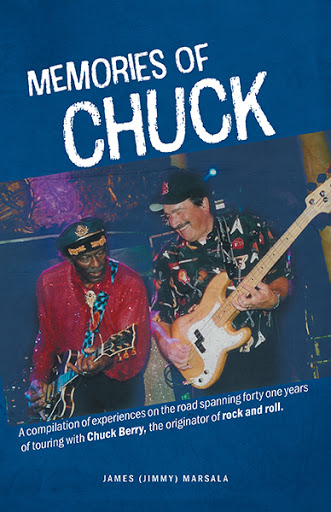 This book is the author's desire to share with Chuck's fans, some of the experiences he had on the road that his fans may want to hear about. Unless you were there, you missed some very interesting shows. This book also tries to show the loyalty and generosity Chuck had for his friends and family. The book tries to set the record straight about some of the claims that Chuck was a hard man to deal with. The book also shows the humor and quit wit that Chuck possessed. It also shows what a treasure this man was to the music industry. His music will live long after we are all gone. What a ride the 41 years has been.

Thank you to Mrs. Themetta Berry for allowing me to use photos of Chuck in this book. She has been very gracious and has approved and enjoyed the book very much.

"A compilation of experiences on the road spanning forty one years of touring with Chuck Berry, the originator of rock and roll."

The author, James (Jimmy) Marsala has been the bassist for Chuck Berry for the past forty one years, from 1973 to 2014, when Chuck played his final show in October 2014, for his eighty eighth Birthday. Jimmy has toured all over the world with Chuck, starting with his first overseas tour in 1979. He has played for royalty, for President Clinton in 1992, and in festivals and television shows, a movie and such interesting places like the Kremlin in Moscow, castles in France and Germany. He also played in Canada, Mexico, South America, Europe Mainland, Scandinavia, Ireland, Northern Ireland, The Philippines, Australia, New Zealand, Guam, Fiji, Leipzig, Japan and Scotland. He was also a very close and dear friend of Chuck Berry.