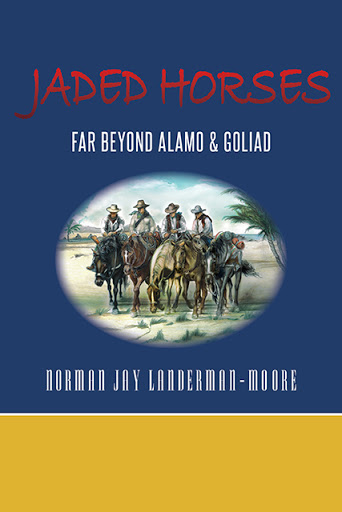 As embers of the Alamo smoldered, the Mexican Army swept across Texas to Goliad where some 350 Texans were slaughtered. In early 1846, The United States declared war with Mexico. Five Tennessee cousins vow to join the fight. Cameron Augustus Moore, narrator of the story, was barely 18 and Cam’s best friend, Andrew Hawkins, called “Hawk”, were selected by lottery to join the fight. With spirits up, anticipations for glory intensified. But time and reality hardened boys into warriors leaning on the nobility and courage of horses which often proved their salvation.

This true account chronicles a long dangerous trek to get to war, the war in Mexico and challenge getting home with their horses, ever watchful in sickness riddled camps or, on command, charging into the teeth of battle where they fought, died or triumphed together. Jaded Horses reveals the spirit of man and horse melded together to survive a terrible conflict in an unforgiving land. It is a story of compassion for defeated enemies and devotion for those back home. It testifies of how being valiant and faithful to vows made with a father brings life’s rewards.

"Landerman-Moore’s descriptive prose skillfully takes readers inside the soldiers’ day-to-day encounters, whether humdrum or terrifying. An added bonus is a recap of the cousins’ fates after their return to Tennessee. All told, the author’s well-researched volume is an enjoyable examination of one family’s part in an unpopular conflict.

An intriguing new angle on a lesser-known American war."

"With heart pounding historical accuracy, Jaded Horses brings people and events into the light of 19th Century realities like few novels ever accomplish. Boys and their horses struggle desperately to survive the Mexican and American War of 1846 through sacred reliance and devotion, even sacrifice. Five young cousins and a friend experience the trials of getting to war, fighting a deadly foe in a most hostile environment, then suffer deadly challenges in making their way home. It is a true account of a young man’s awakening to life, courage, taking the high road of human decency and keeping a pledged honor when tested in the extreme. Based on first-hand accounts, this novel is an unvarnished awakening of American and Mexican history during a war many of the time considered to be absent merit."

Born 1940 near Sacramento, California, Norman is descended from America’s earliest families, the Moore’s, 1621, the Chapman’s, 1609, the Freeman’s 1632, and Bailey’s 1626. Norman is also descended from Mormon pioneers from Scotland, arriving the Salt Lake Valley in 1850.

After a long career in Strategic Planning and Economics, Norman set his efforts to writing. His family history novels focus on what happened, how and where it happened and who was involved. His most recent work, Samuel of the Nations, was accepted by the Abraham Lincoln Presidential Library and Daniel Boone Society of America. Jaded Horses, is the author’s latest novel which chronicles experiences of five cousins and a friend during the Mexican and American War of 1846.

The author resides on Fidalgo Island in the San Juan’s and is presently engaged in research and writing three additional novels, QUINDARO, THE EIGTH HEAVEN and ALL BUT ONE, each are detailed historical accounts involving the author’s ancestors.