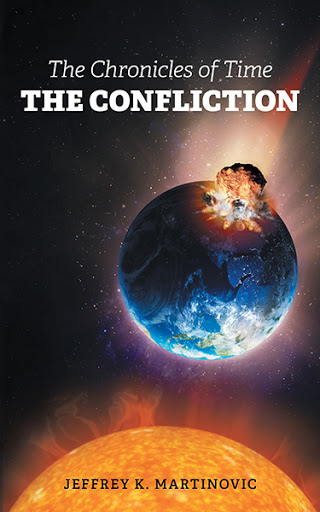 The Chronicles of Time
The Confliction by Jeffrey K. Martinovic

Lama and Lamie, extraordinary child-geniuses, are living out their dreams. They are studying in a world-class German university and working together for an international spy agency called SPION. Their thirteenth birthday is just around the corner. Best of all their arch-nemesis The Caped Genius, has disappeared for over 9 years. Suddenly they are asked to embark on an urgent mission, one of puzzling origins.

Before they can solve their new case a war erupts, almost out of nowhere, which threatens to engulf the entire world. The resourceful girls assemble their families and friends in a desperate attempt to complete their mission before it is too late.

As the pieces begin to come together, nothing is as it seems. Order is replaced with suspicion and former friends become enemies. The world as they know it will surely end if they cannot complete their mission, and solve the mystery in time.

Jeffrey Karl Martinovic from Mississauga, Ontario was 12 years old when he wrote this book. He has led a somewhat unusual childhood up to this early point. He took very easily to writing from an early age, and he wrote and self-printed his first book at the age of 10. This first book introduced the intrepid child-geniuses Lama & Lamie. After this early achievement, his love for writing only grew, and he followed up with the Sechinville trilogy which allowed him to hone his skills and develop his characters. At the same time Jeffrey co-authored a biography of his grandfather which was also self-printed. Jeffrey considers this, his 6th book, to be his first true masterpiece, and is currently working on the next two books in this second series.

The Chronicles of Time has been nominated by our staff as one of their favorite books.