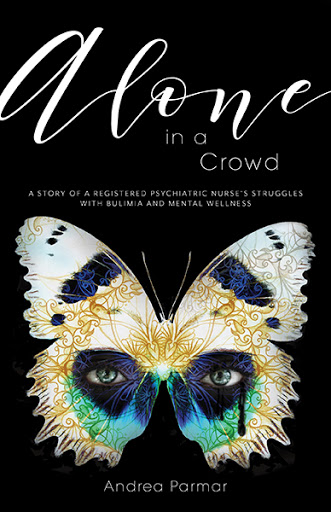 Always seemingly happy and talkative, the author shares the darkest secrets of her sixteen-year battle with an eating disorder. Hiding her insecurities “behind the mask” of a seemingly perfect life, Andrea struggles to be present in the moment even when surrounded by family and friends. Every moment, of each day, her thoughts and energy are consumed by body image concerns, distorted thoughts around food, and other mental health issues. Andrea often finds herself feeling “Alone in a Crowd” despite her professional knowledge and caring family. Her husband also shares his unique "partner's perspective", describing the stressors of being in a relationship consumed by a disordered-eating addiction. He candidly describes his frustrations, and feelings of powerlessness and betrayal, in their fight against food. Eventually, they both realize that a shift in mindset would be necessary for their marriage to survive. With the help of professional counselling services and personal reflection, Andrea is able to gain control over her self-harming ways. Despite overcoming this deadly addiction she soon discovers that “Life” doesn't stand up to applaud her accomplishment, but instead throws more hurdles her way including her recent diagnosis of Multiple Sclerosis.

Alone in a Crowd captures Andrea's eating disorder in a honest and authentic style. This ingenuous reflection of struggles and successes is sure to inspire and instill hope. We feel honoured that BridgePoint was able to play a pivotal role in Andrea's personal discovery and recovery journey by providing a holistic approach to eating disorders. (Carla Chabot)

A tale of courage and honesty. It took many years and many struggles before Andrea was able to say "I'm Okay". It is a story that will positively influence others more than she even realizes. (Dr. Herman Lombard)

Eating Disorders are a deadly mental illness. Andrea's graphic description of living with a chronic Eating Disorder reflects my life with our daughter. The severe lack of awareness, understanding and education in Canada drove me to take action by creating a not for profit Eating Disorder organization. I applaud Andrea for being so honest and sharing such a heart wrenching story of her life. (Wendy Preskow)

Andrea's story into and out of her struggle with an eating disorder is touching and insightful. It offers hope and inspiration to all those seeking recovery! (Dr. Anita Johnston)

Andrea (Gilbert) Parmar grew up in Regina, Saskatchewan, Canada. She moved to Langenburg in 2000, where she now resides with her husband Mick and their two boys Ajay and Sammy. Andrea has worked as a Registered Psychiatric Nurse (RPN) since 1994 until her recent diagnosis of Multiple Sclerosis. She passionately strives to increase public awareness regarding the complex issues of disordered eating. Andrea hopes that by sharing her story of recovery from a "secret battle" with self-harm, anxiety, depression and bulimia that she will not only instill hope in those that suffer from mental illness, but also act as an advocate for the funding of in-patient eating disorder facilities and early intervention programs in schools.