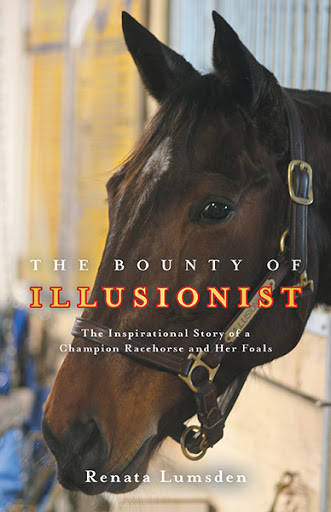 Illusionist, a champion Standardbred racehorse, made headlines in the Toronto Star and Trot magazine in retirement. During her six-year, 140-race career, “Lusi” earned over a million dollars and set numerous track records. In that time, her indomitable spirit also earned her the love and admiration of her owners, Dave and Renata Lumsden. It was as a broodmare, however, that Illusionist would face her biggest challenge and make front-page news. Lusi’s health came into serious jeopardy very late during her third pregnancy, and her owners were faced with a terrible choice. If they acted in the best interest of their beloved mare it would be at the cost of the foal. Likewise, to safeguard the foal, would almost certainly cost them Illusionist. On January 10, 2014, Illusionist underwent a Caesarean section a full two weeks short of term—and the prognosis was chilling. Even with the procedure, Lusi’s chance of survival was no better than a coin toss, and the premature foal’s was pegged at one-in-twenty.

The Bounty of Illusionist is a heartfelt ode to the bond between a champion racehorse and the couple who loved and believed in her.

“A heartfelt tribute to the bond between a champion racehorse and the couple who love and believe in her. The kinship people feel with horses is profound and deeply emotional, and The Bounty of Illusionist is an emotional story.”

“From this heart wrenching story about a double-death crisis during a Standardbred birth emerges a fight-for-life sweepstakes at very long odds. Save the mare? Spare the foal? Split-second decisions and medical heroics make for a pulse-pounding race for hope and survival on the one-mile oval of life. You don’t have to love horses to love this book...but you will.”

— Writer William Thomas, author of bestsellers “The Dog Rules...Damn Near Everything!” and “The Legend Of Zippy Chippy”.

“With clear honesty, Renata Lumsden tells the story of the champion racehorse, Illusionist. She shows unconditional love for living creatures and her own vulnerability in discovering herself through the high points and struggles. I came away with a deep understanding of the sport, from the unyielding passion to the financial wins and losses, but most of all, I felt the message for all of us is to follow our hearts, to trust that we know what is best...”

Renata Lumsden became acquainted with her first horse in 2004, when she went from a harness racing spectator to a harness racehorse owner. Since then, she has seen more than two dozen spirited equines come through the barn. Renata owns a horse farm in Moffat, Ontario, and currently lives with her husband Dave and their two cats in Ancaster, Ontario. The Bounty of Illusionist is her first book.

Also available as an e-book.