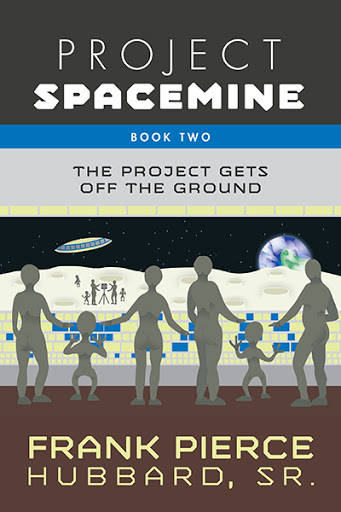 Project Spacemine
The Project Gets Off The Ground
by Frank Pierce Hubbard, Sr.

It’s New Year’s Eve, and the Six are on top of the world (and each other!) at the prospect of Project Spacemine becoming a reality against the odds. With the benevolent support of omniscient aliens, the financial backing of a billionaire, and an unconventionally peaceful polyamorous relationship between them, the Six wouldn’t be blamed for feeling invincible. But changing the world has never been easy, and – as their numbers grow and their successes multiply – challenges lie ahead that threaten the group’s cohesion as well as the project itself.

Energized by their successful venture into space mining, six open-minded innovators embark together on a journey never before undertaken. The team has a vision: harvest minerals from space and, with the profits, make life better for everyone on Earth. Not everyone is supportive of their plan, however, and they soon find themselves forced to confront barriers erected by institutions who’d rather the existence of aliens and richness of outer space’s resources be kept under wraps. But just because the mission is enormous and the challenges are great doesn’t mean they can’t also have some sexy, convention-shattering fun along the way! The team grows, but stays ever-loyal to the mission: the pursuit of the outer limits of both pleasure and prosperity, while seeking universal enlightenment and mankind's ultimate place among the stars.

What if the moon is not a lifeless rock that is in orbit around the Earth...

What if it is a cleverly disguised alien space station, which just happens to always show the same face to the planet which it has been monitoring for thousands of years?

Frank Pierce Hubbard, Sr. is a long-time science fiction fan and theorist of extraterrestrial life on Earth. He holds a Doctorate in Chiropractic and a Masters in Health Sciences and is a practicing Chiropractor and Acupuncturist. He lives in Florida with his wife. This is his second book in a series of futuristic novels.