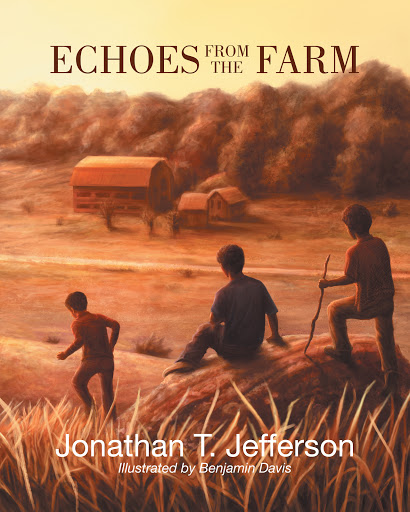 Echoes from the Farm
by Jonathan T. Jefferson

In the early 1970s, when author Dr. Jonathan T. Jefferson (a.k.a. “John-John”) was a young child, his parents did something unprecedented for a working class African American family from Queens: They bought an old, dilapidated farmhouse in Upstate New York’s dairy country as a summer home for them and their eight children. Initially fish out of water, over the next decade the Jefferson family became part of the landscape, the children eagerly anticipating those precious weeks of adventure in cow country. Echoes from the Farm is Dr. Jefferson’s way of sharing the childhood memories from those years that have guided his interests throughout adulthood. Through those memories, he also shares a special part of his family’s love and the love that was shown to them in a unique place in the American tapestry. He would not trade his childhood farm experiences for anything in the world. Journey with John-John as he reminisces about collecting apples for his mother’s homemade apple sauce, jumping out of a barn window into piles of hay, and warring with one of his older brothers. Laugh heartily as you read about how one of his friends mistook a porcupine for a bear, the frogs’ legs he collected for dinner, and his close encounter with the longest snake ever seen in North America. Enjoy the way his most vivid recollections are brought to life by wonderful illustrations. And be inspired to embark on your own adventure to build precious memories for you and your family.

If you met the author today, you would have a difficult time matching up his childhood with the person in front of you. Dr. Jonathan T. Jefferson is a nonfiction writer and education commentator who is well groomed and speaks in a scholarly manner, far from the dusty kid with skinned knees who liked to sink his bare feet into squishy cow pies during his summers on the farm. After teaching in public schools for several years, Dr. Jefferson became a school and school district administrator in 1999. As the seventh of eight children born to Harlem, New York-raised parents, Jonathan grew up in Queens and struggled in school during his early years. His difficulties were due in part to his free spirit, which was cultivated by summers spent on his family’s old farm in Upstate New York. In 2013, he published Mugamore: Succeeding Without Labels—Lessons for Educators. The book, also available through FriesenPress, chronicles Dr. Jefferson’s transformation from mischievous child to focused achiever. To learn more about the author, and to follow him on social media, visit his website: www.authorjonathanjefferson.com.