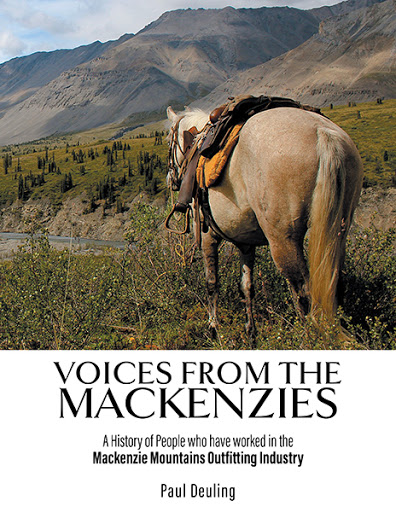 Voices from the Mackenzies
A History of People who have worked in the Mackenzie Mountains Outfitting Industry.
by Paul Deuling

Re-live the experiences of the people who traveled to the distant and untouched Mackenzie Mountains of Canada’s Northwest Territories. This raw, beautiful land was opened to outfitting in 1965, when intrepid entrepreneurs carried out exploratory hunts by horse and backpack to determine whether the Mackenzies were worth an outfitting investment. Five men initially set out to build their businesses in this remote country, making a living through a lot of hard work and a little bit of luck. Guides, cooks and wranglers contributed to their success in the hunt for Dall sheep, grizzly bears, mountain caribou, mountain goats and moose. Their stories are filled with tales of animal encounters, tragedy and humour. Today, eight outfitters operate in the Mackenzie Mountains as the area remains as remote and beautiful as when the original five outfitters trekked into the area in the 1960’s. I hope you enjoy reading Voices From the Mackenzies as much as I enjoyed writing about the folks who made their living in this beautiful country.

The author was born into a hunting family and followed his father, Bill, into the mountains around Britannia Beach, British Columbia at a very early age. When his family moved to another mine site in Uranium City, Saskatchewan, Paul accompanied friends on hunts and trapping expeditions in the Canadian Shield and experienced the fabulous northern fishing. After graduating from Washington State University, he took a teaching job in the Okanagan Valley of B.C. then moved his family north to Whitehorse where he followed his passion of hunting wild sheep. After 32 years of teaching and hunting Dall and Stone sheep in the Yukon, Paul took on a guiding job with Kelly Hougen, of Arctic Red River Outfitters, where he experienced the bounty and beauty of the Mackenzie Mountains first hand. He carried on guiding in the Yukon Territory, where he currently guides for his son, Jarrett, as his love of hunting in the mountains has never diminished. Paul is the current world record holder for mountain caribou, a hunt which he received the coveted Sagamore Hill Medal from the Boone and Crockett Club. He was also awarded the G.C.F. Dalziel Guide of the Year award from the Wild Sheep Foundation in 2010. Paul stays busy operating a Battlefield Tour guiding business, taking groups to Europe to view the cemeteries and battlefields of WW I and WW II. Five grandchildren help occupy his time as they too, want to hunt the hills of the Yukon and fish the bountiful waters of the territory’s lakes. Paul and his wife, Carol, along with their golden retriever, Molly, are as busy in their retirement years as they were when they had full time jobs.