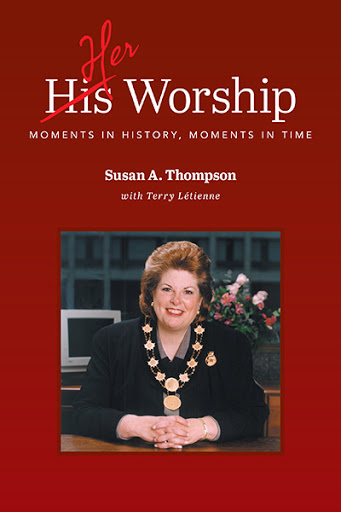 Her Worship
Moments in History, Moments in Time
by Susan A. Thompson and Terry Létienne

Not long after Susan Thompson became Mayor of Winnipeg in 1992, she was given official documents to sign. She immediately noticed “His Worship” printed on all the documents, to the left of where she was to sign her name… not “Her/His” Worship, just “His” Worship. Susan was taken aback that in this day and age, the document was printed in this manner. It was clear that absolutely no thought or consideration had been given to the fact that, at some point, the City of Winnipeg might have a woman as Mayor. She realized that if she requested a reprint of the documents, it would be perceived as an unnecessary expense… plus it would create “chatter.” So Mayor Thompson settled the matter by simply crossing out HIS with a red marker and adding HER instead...hence the title of this book!

This is a remarkable story of motivation, dedication and inspiration. Susan’s life story will inspire you to dream and act on those dreams.

What motivated her to reach such formidable goals? Take a glimpse into her early days as a business owner and the lessons she learned along the way. Find out what really happened at City Hall when the first woman mayor (it only took 118 years!) took office. Susan takes you through the triumphs and the obstacles she faced as a pioneer in a male-oriented society.

Susan was Mayor of Winnipeg during some of the city’s most extraordinary times…winning the bid for the 1999 Pan Am Games, the loss of the Winnipeg Jets and the 1997 Flood of the Century. Find out firsthand how Susan led the city through these trying and unforgettable moments in time. Entrepreneur, politician, diplomat, fundraiser, storyteller… Meet “the one and only” SUSAN THOMPSON.