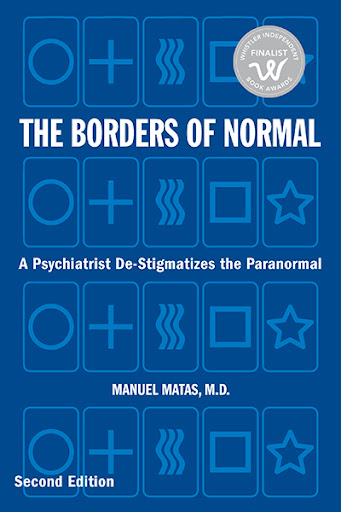 The Borders of Normal
A Psychiatrist De-Stigmatizes the Paranormal
by Manuel Matas, M.D.

PRAISE FOR THE BORDERS OF NORMAL

"A fascinating book. For a subject matter as vast and controversial as this, being able to put forward a logical and credible analysis with clarity and brevity is no mean feat. I couldn't help smiling as I read along." Jachike Samuelson, OnlineBookClub.org

"Fascinating, well-presented, and highly thought-provoking. This book will challenge the most skeptical amongst us." Book Viral Review

"Persuasive, inspiring, a must-read. It offers brilliant insights into the existence of paranormal and the probabilities that exist beyond the known borders of consciousness." The Prairies Book Review

"The most engaging, personal research document I've encountered, exceptionally well-researched, designed to engage, enlighten, and ultimately heal. It reads easily and feels like a conversation in a relaxed setting. This book left me, as I suspect it will for most readers, with a calm and reassuring sense of optimism." Bill Arnott, award-winning author, poet, songwriter, The Miramichi Reader

"Some often refer to a literary work as a must-read. Borders is not just that - rather it is a foundational piece. It is courageous yet deeply grounded. It speaks to the reader from multiple levels.

In The Borders of Normal, Dr Matas explores a wide range of paranormal phenomena, including ESP, telepathy, visions, premonitions, and precognitive dreams. He shares his professional expertise along with his own, personal paranormal experiences, which include near-death and out-of-body experiences, encounters with message-bearing apparitions, and angelic visitations. In the process he helps readers learn how to distinguish between psychic and psychotic.

By sharing his knowledge in psychiatry and the world of the unknown, he hopes to normalize and destigmatize paranormal and psychic phenomena, thereby allowing readers to find deep meaning in their own personal paranormal and spiritual encounters. He also hopes that by sharing his own experiences, he will give readers permission to share their own experiences, without fear of being judged or ridiculed.

Dr. Matas is a clinical psychiatrist with forty years of experience in university teaching hospitals and private practice, as well as participation in scientific and psychiatric boards and associations.

He has served on the Board and the Scientific Council of the Canadian Psychiatric Association.

He has been featured in numerous magazines, podcasts, and radio interviews, including CBC Radio’s Tapestry with Mary Hynes, Coast to Coast AM with George Noory, Midnight in the Desert with Dave Schrader, Whitley Strieber’s Dreamland podcast, Richard Hoagland’s The Other Side of Midnight, The God Show with Pat McMahon, On the Odd with Mark Jeacoma, Aquarian Radio, Standing in the Sunlight, IntuiTalks Radio with Angel Meadows, Nocturnal Frequency, OM Times, and EdgeScience magazine.

He received his Medical Degree from the University of Manitoba and his Diploma in Psychiatry from McGill University. He has been published extensively in peer-reviewed psychiatric journals and is a frequent and popular presenter at psychiatric and mind/body/spirit conferences.