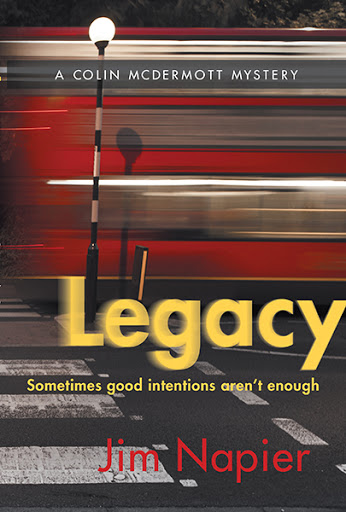 There were three legacies in Sally Beck’s brief life. The first was her grandmother’s bequest, which allowed Sally to attend an elite girls’ school. That was followed by the second, a life-changing event she experienced while a student there. The final legacy was due to Sally’s chance encounter, years later, with someone from her past which set in motion a chain of violence no one could have foreseen.

When a young woman killed in London traffic is found to be carrying no identification, Detective Inspector Colin McDermott is assigned to figure out who she is and to track down her family so they can be notified. Soon he discovers she had not one but two identities, which concealed a very private life. When the trail leads back to McDermott’s alma mater, the detective is faced with the possibility that the young woman was murdered—and whether an old friend and mentor is involved.

“A classic British whodunit, reminiscent of the Golden Age. Napier depicts the bitter political rivalry of academia, and writes with dry wit and crisp dialogue.”

—Cath Staincliffe, award-winning and bestselling author of the Scott and Bailey and the Blue Murder tales, both televised

“If you like Dalgleish, you’ll love Inspector Colin McDermott, an unflappable, stoic Brit with a warm heart and a professional’s eye. Napier’s London is 21st century cosmopolitan, while his St. Gregory’s College is an amiable throwback to the cloistered world of eccentric—and perhaps deadly—academics. Rich, textured, atmospheric writing with sensitively rendered three-dimensional characters that keep you turning the pages. The writing is first rate.”

After a successful academic career that included teaching crime fiction and creative writing, Jim Napier turned to writing full time. Since then he has published nearly five hundred reviews, interviews, and articles about crime writers, both in print and on multiple Internet sites, and has participated in writing workshops in Britain and Canada. He has chaired or participated in panels on crime fiction at Montreal’s Bleu Metropolis literary festival and at the Canadian crime writing festival, Bloody Words. He has twice served on juries for the Arthur Ellis Awards for Canadian crime writing, and in 2010 he chaired the Arthur Ellis Awards. Along with such notable crime writers as Louise Penny, Peter James, Sophie Hannah, Simon Brett, Marcia Talley and Rhys Bowen he contributed to an anthology on the craft of crime writing titled Now Write! Mysteries, published by Tarcher/Penguin. In 2012 he was commissioned to write biographies for several Canadian crime writers for the Canadian Encyclopedia, and also joined Louise Penny in co-chairing a fiction writing workshop at the Knowlton LitFest. Legacy is his first crime novel in the Colin McDermott Mysteries; the second, Ridley’s War, is nearing completion.

Legacy is published by Friesen Press and distributed by Ingram, and is available at over 35,000 online booksellers worldwide including Amazon, Barnes & Noble, and Chapters. eBooks are distributed through the Apple iBookstore, Amazon Kindle store, Google Play Bookstore, Nook Store and the Kobo Store.

If you enjoyed this book, please consider posting a review on Amazon.com. It needn’t be long or detailed, simply your honest reaction. It’s quite easy to do so: simply go to Amazon.com/books/Jim Napier/Legacy– and thank you for your time!

For more on the Colin McDermott series, or to contact the author, go to http://JimNapierMysteries.com