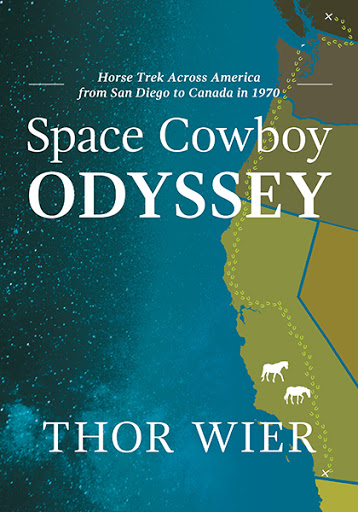 This is a true story of 3 youths seeking truth by traveling across America from San Diego to Hope British Columbia by horse. They learned that the horse was the migration of humanity for 1000’s of years that seemed to have little affect on their surroundings, but in less than one century they seemed to see a repercussion of events from humanity affecting their surroundings. This is an adventure that transpired for over 3 years of an odyssey of a 2600 mile trek thru the Sierras, Cascades, and along the ocean by horseback in 1970. This was an idea with ambition and will power that showed within these 3 concepts anyone can accomplish their goal, dream, or their wildest desire. It shows concepts of how we can show room for improvement in the world by alternative changes that may be part of the hope and survival of humanity. There is a documentary of the story, and many Newspapers had article of the long ride.

True Story Televised, written in several Newspapers about 3 novice youths traveling the length of America through the mountains and along the ocean, that not only became horseman, but became men. Born and raised in the city, and suddenly surrounded by the openness of endless nature, mountains, lakes rivers, and stars that did not end or begin in lakes in the high country.

Thor Wier was brought up in the city along a canyon, and spent most of his time in the canyon, realizing his love for nature. At the age of 11 he nearly lost his life from an accident, but in return got a movie camera from the neighborhood that put together money for him to start his interest in making films. He made several films growing up with friends, and then became a producer for a local TV channel, and made many documentaries about nature. He rode from San Diego to Canada by horse, and when he came back he opened up a Horse Business and took people out on Pack Trips in the Cuyamaca Mountains. Tourist complained being sore from riding all day, so he invented the water saddle in 1972. He showed the trek to Canada by horse from the grant he received from school, and taught a class at SDSU ”Horse Exploration Packing and Herbs along the Trail”, where he hired a Medicine Man from Mexico that had taught the students about the medicinal, food, and building aspects of plants. His love for this Planet seeing it thru the eyes of an animal by traveling across the western hemisphere, and by seeing the beauty of the mountains, made him realize the need for helping show how much need there is for all of us to work together as a unite of those interested in helping keep this world in balance for the sake of making it workable for humanity.