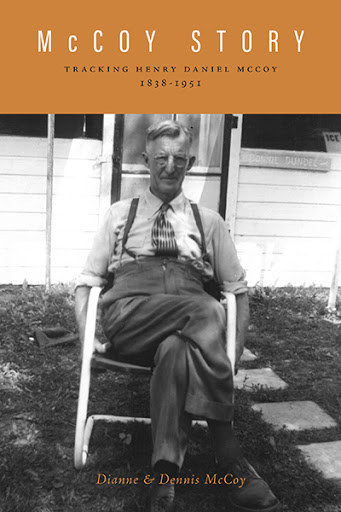 All Henry ever wanted was to escape the skinflint soil of his father's farm and make a life for himself, maybe make enough for a wife and children. Ordinary enough ambitions, but big enough to lead him across a continent, through near-fatal illness and betrayal to a shack in Edmonton, a blacksmith job, and finally a future. His determination resembled that of his forebears, and it was reason enough for this family history to be written.

While Henry thought he had left the past behind in Quebec, his descendants were busy embroidering the family story. They spoke of Irish roots and leaving Cork for Canada. They stitched up traces of poor brother Will McCoy who had died a spectacular death in the wilds of North Dakota. Or was that South Dakota? Then they traced a long lost sister to California and coloured in a sad tale of how she got there. But how much of what they said was true?

It was enough to set us off on a 15-year voyage through archives, libraries, family interviews, and places Henry had been to cobble together an answer.

"Even for someone who's not a member of the family, it is quite easy to get caught up in the chase! The result is a step-by-step account that will be an engaging and deeply valuable treasure for immediate and extended family members alike." - Editor, FriesenPress

The Author: Dianne McCoy is a graduate of the University of Alberta, teacher, and genealogy hobbyist. She is also mother of Erin and Justin, two of Henry's many great grandchildren.

The Researcher: Dennis McCoy is the grandson of Henry, also a graduate of the University of Alberta, and business partner in the once closely-held McCoy Brothers, a multifaceted spring and oilfield manufacturing firm in Edmonton, Alberta.