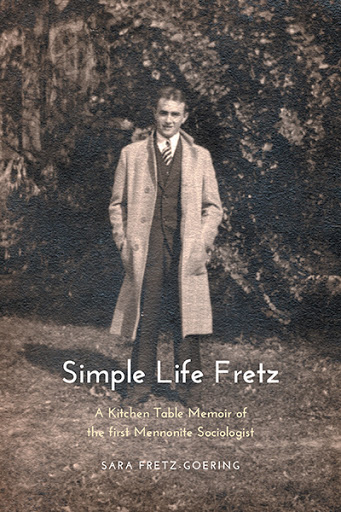 His daughter has captured the engaging life story of J. Winfield Fretz, the first Mennonite sociologist, told in his personable voice from childhood days on a Pennsylvania farm through years as a student, professor, researcher, author, and founding president of Conrad Grebel University College in Waterloo, Ontario. The narrative voice ends with her conversations with him reflecting on simple matters of the heart. The author has drawn from over 300 letters between her father and his older brother, recorded interviews, letters of her mother's, and personal conversations with her father. Excerpts from others on their interactions with this wonderfully spirited man are included.

If one were to select a score of the most influential American Mennonites of the past century, J. Winfield Fretz would be on that list. He was present at the threshold of so many enterprises that brought scattered, cautious, and hesitant Mennonites together. He was a leader in the renaissance of Mennonite studies—Mennonite Life, Mennonite Quarterly Review, Proceedings of Mennonite Cultural Conferences, Conrad Grebel Review, Institute of Mennonite studies, and research projects. Where in all academia has there been a Ph.D. with such a common touch? . For Winfield, being a Mennonite was invitational, hospitable, missional, good news.

As one who was at Conrad Grebel University College during the founding years J. Winfield Fretz served as President, I can praise this book for its veracity. This is a marvelous book, not least for allowing her Dad to tell his life-story himself.

J. Winfield Fretz was an important 20th-century Mennonite voice. His story "in his own words" is worth reading and pondering. - Keith L. Sprunger, Oswald H. Wedel Professor of History Emeritus, Bethel College

Sara Fretz-Goering, daughter of J. Winfield Fretz, gathered remaining transcripts, letters, and photos after her father's death in 2005 to write a life story for the extended family. Soon other people expressed keen interest in reading the book and the work expanded beyond personal family stories to include her father's academic research, involvement in the larger Mennonite church, and his career trajectory. He was well-known for his humorous anecdotes, his indefatigable interest in life, and his optimistic belief in the goodness of others.

The author resides outside of Washington DC with her husband Peter and their golden retriever Bogey. She volunteers as a hospice respite caregiver and sometimes takes Bogey along on visits in his proud role as trained therapy dog. She taught English in middle schools for twenty-eight years which allowed her to be actively engaged with literature and writing on a daily basis. This is her first published book.