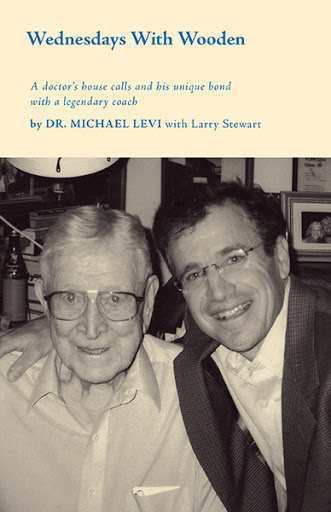 Wednesdays With Wooden
A doctor's house calls and his unique bond with a legendary coach
by Dr. Michael Levi

Dr. Michael Levi, a Southern California podiatrist, as a youth admired UCLA basketball Coach John Wooden. He attended several of his summer camps and regularly went to UCLA basketball games at Pauley Pavilion with his father, Myron “Mike” Levi. Through a series of events, Dr. Levi became the Coach’s podiatrist in his later years. While some doctors play golf on Wednesdays, Dr. Levi set aside time on Wednesdays to treat Coach Wooden at his home in Encino, California. Besides easing the pain the Coach suffered in his feet, a special bond between the two developed and many topics were discussed. This book is tribute to both Coach Wooden and Dr. Levi’s late father. Both passed in 2010.

Coach Wooden never gave up his role as teacher. You can tell from his relationship with people from all walks of life that teaching was his life’s focus. Dr. Levi’s book will make it quite clear to anyone how strong Coach Wooden felt this calling. — Kareem Abdul-Jabbar

Friendship was most important to Coach Wooden. It is one of the primal foundational tenets of the human attributes and personal characteristics that permeates all of his writings, teachings and beliefs. Coach particularly treasured his friendship with Dr. Michael Levi because of what the doctor constantly brought to their relationship in the game of life that these two master teachers lived to the fullest. Dr. Levi’s book seamlessly allows you to do the same. — Bill Walton

I was greatly blessed to have played for Coach Wooden for three years and then to become close friends with him over the next 45 years of his life. As well as I knew him, it’s always fun to hear personal stories from others that knew him over the years. And, so it is with this book, another inside look at one of my favorite people. It’s a fun to read! — Keith Erickson

Having spent countless wonderful and inspiring hours with John Wooden, on the court and in the study of his Encino home, I can say that one minute in the presence of this great leader and man can be a life-changing experience because of the wisdom that he shares with love. Dr. Michael Levi was privileged to have many one-on-one moments with Coach Wooden. So get in your easy chair, relax, and become a fly on the wall. — Swen Nater

A warm and resonant remembrance of a special friendship between two remarkable men. Dr. Levi is a great example of a man who gave a gift to Coach Wooden with no thought of getting anything tangible in return. And then he found that he was paid in ways richer than he could have ever imagined. Not in dollars, but in wisdom, insight, perspective, humor and friendship. Spend some time with Coach and Dr. Levi, and you too will be enriched. — Andy Hill

Besides having a podiatric practice in Santa Monica, California, Dr. Michael Levi finds time to provide his services elsewhere. He is the team podiatrist for the Los Angeles Clippers of the NBA, the Loyola Marymount University athletic department and the Los Angeles Ballet Company. He also volunteers at the L.A. Zoo, taking care of the podiatric ailments of the primates. In addition, he holds teaching positions at the Western College of Podiatric Medicine in Pomona and Loyola Marymount University in Los Angeles. Dr. Levi, who resides in West Los Angeles with his wife Lori, also participates in triathlons, including the Half-Ironman on the big island of Hawaii.

Co-author Larry Stewart was a sportswriter and editor in Los Angeles for nearly 40 years — nine at the old L.A. Herald Examiner and 30-plus at the L.A. Times. Stewart also had a close relationship with Coach Wooden and remains close with his daughter Nan.