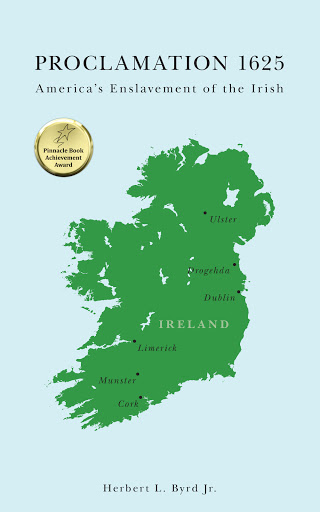 When one thinks of slavery in America, the only thought that comes to mind is Africans picking cotton in the fields of America. What many Americans don’t know is that the Irish preceded the Africans as slaves in the early British colonies of America and the West Indies. They toiled in the tobacco fields of Virginia and Maryland and the sugar cane fields of Barbados and Jamaica.

For over 179 years, the Irish were the primary source of slave labor in the British American colonies. Proclamation 1625 is the unveiling of the true and untold history of slavery in America. King James I’s Proclamation ordering the Irish be placed in bondage opened the door to wholesale slavery of Irish men, women and children. This was not indentured servitude but raw, brutal mistreatment that included being beaten to death.

The Irish were forced from their land, kidnapped, fastened with heavy iron collars around their necks, chained to 50 other people and held in cargo holds aboard ships as they were transported to the American colonies.

During the early colonial period, free European and free African settlers socialized and married. Intermarriages existed in the colonies for over a hundred years until the birth and evolution of white racism. The Irish and African slaves were housed together and were forced to mate to provide the plantation owners with the additional slaves they needed.

The British abolished slavery in 1833. This act emancipated the Irish slaves in the British West Indies. America abolished slavery in 1865. None of this freed the Irish to the degree they wanted because America had classified them as ‘colored’ and treated them accordingly. It was only after the ruling class accepted them as ‘white’ that they could finally say: “I’m free, white and 21.”

Proclamation 1625 is for those who want to know the true and untold history of slavery in America.

Negro slavery was efficiently established in colonial America because Black slaves were governed, organized and controlled by the structures and organization that were first used to enslave and control Whites. Black slaves were 'late comers fitted into a system already developed'.

(Michael Hoffman, They Were White and They Were Slaves and Ulrich B. Phillips, Life and Labor in the Old South)

Herbert Byrd is president of MOJA, an information technology and intelligence analysis company that is in support of the U.S. intelligence Community and national level decision-makers. He has a Master of Science degree in Electrical Engineering, Syracuse University, L. C. Smith College of Engineering and Computer Science.