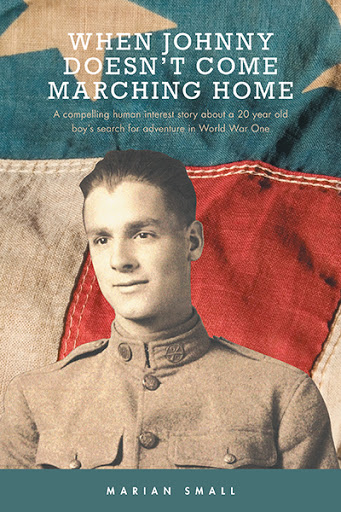 In 2017, the United States of America will be celebrating the Centennial of World War I. 1st Sergeant JOHN RUSSELL SMALL was a Veteran of that War. This is a true account of his experiences before, during and after the War, as written by his daughter, MARIAN SMALL, who set out at the age of 89 years to tell the story of a 20 year old boy whose love of adventure took him in 1916 to the Texas/Mexican border to join Brigadier-General John J. Pershing in the pursuit of Pancho Villa, the Mexican bandit, and then in 1918 to the trenches in France and No Man’s Land.

At her Dad’s death in 1978, Marian inherited his collection of memorabilia which dates back 100 years to the time of his enlistment in the Ohio National Guard in 1916. Included were historic photographs and the original letters that John had written to his parents and to his sweetheart, Mary, (later his wife) as well as a 1918 Diary that he took with him when he was sent over the sea to France. John kept the Diary with him on the many nights when he led his Platoon as they marched for miles in the dark, in rain and mud, to the various trenches in No Man’s Land. Even in the cootie and rat-filled trenches, with the sounds and dangers of the war going on all around him, he continued to write in the Diary and in his letters describing in detail the war as he was witnessing it.

This is a compelling human interest story that recognizes the valor of the doughboys in WWI. Those who returned to the country they loved faced many hardships, including the Great Depression. The war, however, had given them the will to survive and it was through them and their stubbornness, frugality, pride and a firm belief in disciplining their children that a generation was born that, in later years, after a second World War, became know as the greatest generation.

MARIAN SMALL, the author, has been writing all her life, but this is the first time she has had anything published. Her next and biggest endeavor is to complete and publish "The Founders of Our Nation", the story of twelve generations of a family in America.