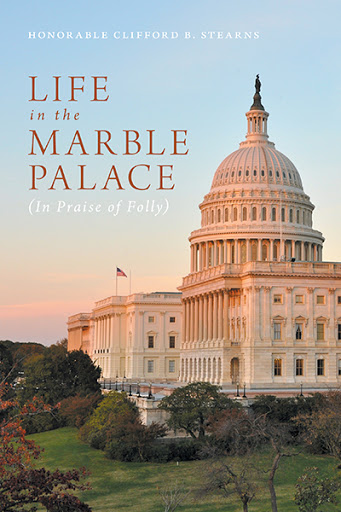 Life in the Marble Palace
In Praise of Folly
by Honorable Clifford B. Stearns

As a 24 year former member of the United States Congress, Mr. Stearns describes the lessons he learned from getting elected and re-elected, his experience as a legislator and finally the lessons he learned about our Republic. These lessons go to the heart of explaining what must be done to preserve our 240 year experiment in democracy. He describes the tumultuous period of the Speaker Gingrich years, the 2008 Great recession, numerous scandals including the impeachment of President Bill Clinton and the loss and regaining of the Republican majority in the United States House of Representatives.

“This work delivers a thoughtful appraisal of American democracy and an edifying peek into the corridors of political power. An assemblage of admirably forthcoming first-person essays about the practice of American legislation.” - Kirkus Reviews

"This congressional exposé contains much hard-won wisdom and heartfelt critique, and should be read by every concerned citizen. In Life in the Marble Palace: In Praise of Folly, Clifford B. Stearns, a twenty-four-year member of the House of Representatives, lifts the curtain on what it’s like to be “on the board of the most powerful body in the world—the United States of America.” Revelatory and sometimes shocking, Stearns’s report of what really goes on behind the scenes in the United States Congress is a call to all American citizens to wake up and take action to preserve what is left of the nation’s threatened democracy." - Foreword Clarion Reviews

Cliff Stearns is an Executive Director based in APCO Worldwide’s Washington, DC, office and serves as a member of APCO’s International Advisory Council. Recently he was elected President of the United States Association of Former Members of Congress (USAFMC). He is a former Member of Congress for Florida’s 6th district, where he gained extensive experience in telecommunications, technology, cybersecurity and international trade during his twenty-four years of service. Congressman Stearns was also a business owner of motels and restaurants before being elected to Congress. As chair of the Energy & Commerce Oversight and Investigations Subcommittee, he helped increase transparency in the federal government and led the Solyndra investigation. Congressman Stearns served as the Republican leader on the Communications, Technology and Internet Subcommittee and was chairman of the Subcommittee on Commerce, Manufacturing and Trade, where he enacted consumer privacy and data security legislation. He is a graduated of the George Washington University with a degree in electrical engineering. He was a captain in the United States Air Force and served four years as an aerospace project engineer providing satellite reconnaissance of Vietnam. He was awarded the Air Force Commendation Medal for distinguished service and meritorious achievement and later, as a Congressman, received the Air Force Association W. Stuart Symington Award, the highest honor presented to a civilian in the field of national security. Mr. Stearns lives in Ocala, Florida, with his wife Joan. He and Joan have three grown sons.