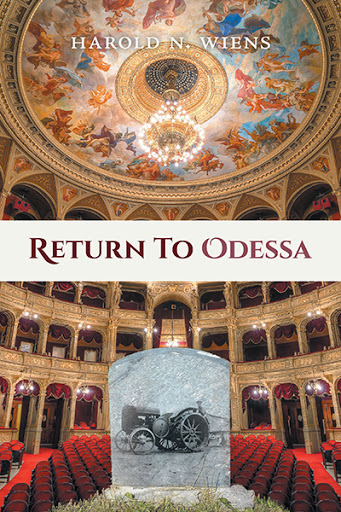 A Mennonite baby named Raisa Friedrichsen is born as her mother dies in Blumenau, Ukraine: one of the last villages established in the historic Molotschna Colony. Her father, only sixteen years old, leaves Raisa to be raised by her grandparents, taking on the role of her brother. With schoolyard bullies harassing her with the truth, Raisa now known as Christina, finally leaves home to find a new life in Odessa.

Befriended by a Russian officer who falls in love with her street singing, Christina finds acceptance, support and encouragement, only to lose it once more after a tragic incident. Returning home a widow with a baby, she enters into a second marriage with a devastatingly similar outcome. Finding herself a single mother of two teenage sons on the eve of the Russian Revolution, Christina must do what it takes to keep her boys safe. Finally escaping the clutches of Nestor Makhno, Alex and Nicholas, her sons, join a group of Mennonites immigrating to rural Manitoba, Canada.

As the years pass, Alex and Nicholas become valued members of their church and community. Alex’s son Jacob becomes intrigued with the family history, travels to the USSR on business and begins researching his maternal grandmother’s story. As Jacob and his sister Stephanie, an aspiring opera singer, travel to Odessa, they cannot know how their paths will fulfil the dreams and aspirations of their grandmother Christina, who was not considered good enough to enter the Odessa Opera House, let alone perform in it.

Harold Wiens is a singer and Professor Emeritus who recently retired from the Department of Music, University of Alberta, where he held a teaching position for thirty-five years. A graduate of Wilfrid Laurier University, Harold spent five years studying and performing in Germany, and graduated from the Nordwestdeutsche Musik-Akademie with honours. He has appeared as recitalist and soloist with orchestras and choral societies in a number of countries throughout Europe. Also, he has performed across Canada and the U.S.A. Radio and television recordings include appearances on the national CBC networks and recordings for Radio-Canada International. He has published his research on the role of voice training/development in managing stress and also its healing effect upon Parkinson’s Disease.

Harold and his wife Diana are empty-nesters who live in Edmonton, Alberta. Their daughter Juliana is in Halifax and their son Michael, wife Brooke and grandchildren Braxton and Alexa live in Burlington, Ontario.

The fictional events in this book were inspired by the experiences of Harold’s parents, Nikolai and Anna Wiens. In 1925, as Russian Mennonites, they immigrated to Hepburn, Saskatchewan from Tschongrav, Crimea. Two years later, they relocated to Manitoba where they survived the Great Depression on farms in Holmfield and in the Killarney and Dauphin areas.