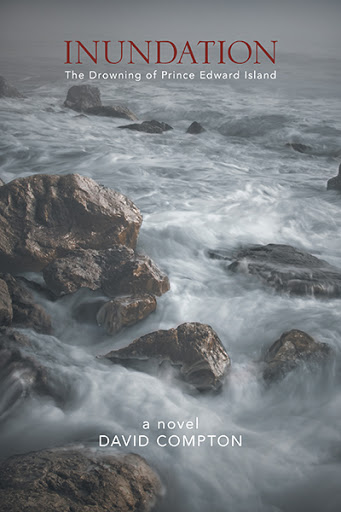 Inundation
The Drowning of Prince Edward Island
by David Compton

Breaking people’s hearts while saving their lives is part of Quinn Axworthy’s job. As the government’s point man on climate change, he’s watched families lose their houses, their history, even their lives to the sea.

For Laura MacIsaac, the ocean is a significant presence in her life, maybe as important as the sun and the moon, and God. It is heart-rending for her to watch it slowly claim her property while she nurses her dying father in the house he cannot bear to leave.

Farisha Faruk fled Bangladesh and her abusive, misbegotten marriage to settle in Prince Edward Island. She’s making a new life for herself and her son, but fears that her unstable husband’s search for them will be unrelenting.

Rory MacKinnon is building a “salvation ship” to save as many Christians as possible from the flood Jesus has told him will drown PEI.

Virginia Lavallée galvanizes thousands of believers with her visions of the Virgin Mary, forcing the Church to wrestle with the consequences. Their stories unfold in a world where global warming has defined a harsh new reality.

"Compton sews a multi-racial quilt of lovers caught in circumstances beyond their control, the elderly and the sick too stubborn or too ill to move, unscrupulous businessmen selling real estate that's already underwater to unsuspecting foreigners, villains taking advantage of the disenfranchised, and heroes coming to the aid of people in need. Inundation is a frightening depiction of a potential world to come, painted with the soft pastels of humanism and captured on a climate-canvas of our own making. It is perhaps less a polemic than it is a portent of things to come."

"What will a warmer world mean for our children and grandchildren? Inundation is a fascinating boots-on-the-ground account of the effects of climate change through the eyes of the people living it. The novel touches on geopolitics, media manipulation and immigration, but at heart it's a loving chronicle of the men, woman and children fighting to keep their beloved Island safe. Media insider David Compton gives us a relentless and a compelling tale of a more-than-likely future. The characters pull you in from the get-go with their stories of love and loss in a changing world. A good read- and if you're feeling brave, read it at the beach, with water lapping at your toes, creeping higher..."

David Compton is the author of Inundation—an early version of which was a finalist in the 2012 BookLogix Fiction Contest—and of the 2010 memoir, Leaving Home: PEI Farm Boy ... CNN News Anchor. After years spent as a broadcast journalist, he has changed focus to write his own stories. Convinced that his children and grandchildren will live in an ever more inhospitable environment because of global warming, he is adding his voice to the calls for action. The result is Inundation.

David is an avid reader of literary fiction; voiceover actor; and international traveller, his passport stamped with the names of numerous overseas destinations.

Originally from Prince Edward Island, he moved to the U.S. in 1990 for a news anchoring position with CNN International. David lives with his wife of 27 years in the heart of a landlocked American city, which could not be more unlike P.E.I. He relishes the summer weeks he’s able to spend in his ocean-side cottage on the Island.