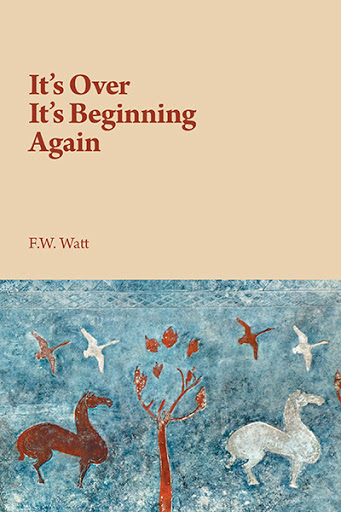 It's Over It's Beginning Again
by F.W. Watt

F.W. Watt published It’s Over It’s Beginning in 1986 (The Porcupine’s Quill, Inc.). More than fifty poems were included, capturing what seemed like a whole lifetime of personal experience, in contrasting country and city worlds, poems about gains and losses, successes and failures, living and dying, sorrows and celebrations. Not all the journeys, meditations and discoveries he thought at the time worthy of recording were included in this first collection. As well, there were more years still to live, more poems to be written. It was happening — again: the need to put down in words the moments that cry out to be understood, preserved and shared. Over thirty more poems about loving and losing, about sex, about trees, dogs, cats, horses, about that best kept secret of old age — that the wanting outlives the having. More laughing poems. Death-row joking while doing time in the inescapable prison called “the golden years” by people who aren’t there yet. Together with those previously published poems, they make up this new book called It’s Over It’s Beginning Again.

Morley Callaghan: These poems have what a remarkable story sometimes has -- an overhang -- something remaining in the head echoing like an organ note after the reader is done. The special quality that so impressed me was this -- all the poems have a strange authenticity.

George Bowering: I was greatly impressed by the professionalism and taste and expertise and sensitivity of the poems. They are a poet's poems.

Robert Kroetsch: They move me with "careful" surprises.

Al Purdy: It's a fine book. I read it at very nearly one continuous a stretch.

Earle Birney: I've read it, Kiver to Kiver, with interest and pleasure.

Frank Watt was born in Saskatchewan in 1927, brought up in Vancouver, educated at the University of British Columbia, Oxford University (as a Rhodes Scholar), and the University of Toronto, where he taught for thirty-three years. Since the 1950’s his publications have included scholarly books, articles, and reviews dealing with British, American and Canadian literature and labor history, as well as short stories and poems. It’s Over It’s Beginning (1986) brought together a selection of his verse for the first time in book form. On December 1, 2014, he published seven novels and a book of twenty-three short stories.