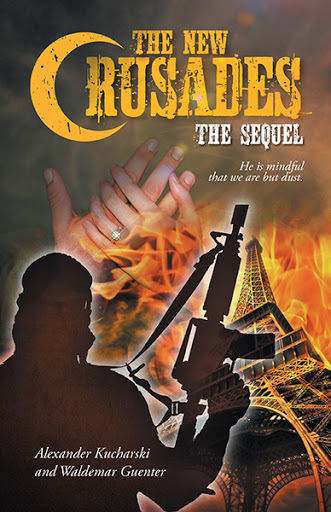 The New Crusades: The Sequel
He is mindful that we are but dust.
by Alexander Kucharski and Waldemar Guenter

“I hope it was worth it!” challenged Spencer. Abqurah countered, “It was! It’s a better way to shoot things than with a Kalashnikov! I wish I could turn all guns in the world into cameras.” From what she showed them on the LCD panel, she did get some pretty pictures of the Arc de Triomphe by night, with yellow headlights beaming down on her from the oncoming traffic.

Waldemar (Wally) Guenter wrote a murder mystery, entitled The New Crusades, about Aamir killing his older sister, Hazirah, in a fictional honour-killing at a real place, Ball’s Falls, Ontario, in October 2011. The parents are complicit in this crime because they help Aamir escape to ISIS. The younger sister, Abqurah, does not know about her family’s atrocious plan. Waldemar Guenter, a scenery photographer, discovers Hazirah’s body which prompts him to write the first novel as a kind of therapy.

The sequel itself takes up the plot in October 2014 with the last two months of Wally’s life. He is dying of pancreatic cancer. Even as he lay dying, life goes on for his young friends who get engaged and get married with high hopes for their future.

Alexander Kucharski the main writer of this sequel, reconnects with his old flame, Lena. Also Detective Ed Spencer, from the first novel, courts and marries, Abqurah, the youngest daughter of the Ibrahims who went to prison for their part in their daughter’s honor-killing. The Spencers become Christian and plan on a lovely honeymoon in Paris.

They arrive on Wednesday morning, January 7th, 2014. This couldn’t be at a worse time. Saïd and Chérif Kouachi have just broken into the Charlie Hebdo magazine offices with assault rifles to seek revenge for the magazine’s satirization of their Prophet. By the time they are through, 12 people lie dead and the brothers escape putting Paris on high alert. Ed Spencer and Abqurah’s honeymoon turns into a nightmare...but not all is lost...

Waldemar Guenter was a reporter, editor, electrical apprentice, teacher, Bible student, web designer, and wedding photographer. He often said, if you live long enough, you can become most anything. For relaxation, Wally loved watching old black and white movies, especially old crime shows, like Peter Gunn. Even though he was computer savvy, he did not own a cell phone. He did not belong to Facebook, nor to Twitter. He said that he didn’t even like e-mails. During the last months of his life, Wally used his writing talent as a sort of therapy, against the bad nightmares he was having, after discovering Hazirah’s body in the woods at Ball's Falls. Wally’s book, The New Crusades, came out of this traumatic experience.Wally died on November 29, 2014, after a short battle with pancreatic cancer. Wally’s wife, who cherished her anonymity, decided to sell the house in Canada and buy a condo in Arizona. She says the dry warm weather will do her a world of good. She hates Canadian winters.

My name is Alexander Kucharski. I’m the main author of this sequel, which I promised Wally I’d finish after he passed away. I became Wally’s friend during a Web Design course at Mohawk College. It was my connection to Wally which led the police to solving the honour-killing in the first novel, The New Crusades. My employment history is about as scattered as Wally's. I’ve been a teacher, a framer, a web designer and lately an author. Lena and I got married recently. She has been hired as a DJ at a radio station in Comox, British Columbia. I’ve been hired there also, as a sports writer for a weekly newspaper. Life is a gift and i appreciate it even more, now that Wally has passed away. I want him to be remembered in these books.