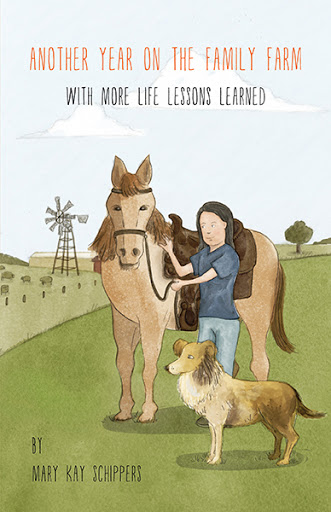 It’s 1970, mere months after the first man walked on the moon. The Vietnam War is raging on, drawing thousands of young American men into compulsory military service. Campus riots become commonplace, while Bridge Over Troubled Water tops the music charts. And millions of families across the nation gather around their television sets on Sunday evenings to watch what is to be the final season of the Ed Sullivan Show.

For thirteen-year-old Mary Kay, life changes irrevocably when the last of her brothers and sisters marries and moves away from their Kansas family farm. As the youngest of seven, she has always been surrounded by people and noise and activity. The sudden loneliness hits hard as Mary Kay tries to adapt to her new reality. At home, her dogs Sandy and Sport and her horse Strawberry become her sole companions, as she helps her loving Mama and hard-working Daddy carry on with their never-ending farm chores. At school, Mary Kay graduates from the comforting country grade school where her oldest brother had been her teacher and now faces the challenge of high school in another town with no friends.

Mary Kay Schippers is a retired instructor of university mathematics. She left her family farm at age 19 and lived for 33 years in the city. She now lives with her husband of 39 years, her high-school sweetheart, on her great-grandfather’s family farm in rural Kansas. They share their farm with 3 horses, 2 dogs, 2 cats and 4 rabbits. She is very happy to be home again.