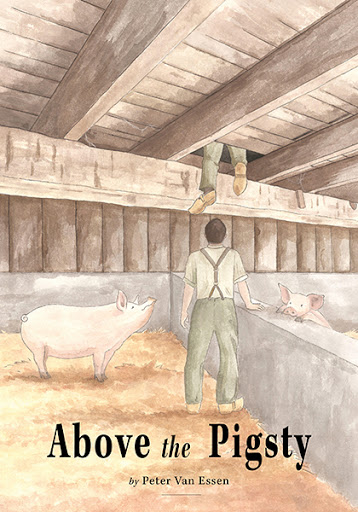 Above the Pigsty
by Peter Van Essen

In 1943 Peter, a 21-year-old Dutch citizen, faces a choice: forced labour in Germany or go into hiding with the help of the resistance movement. After the war he faces another choice: remain in the Netherlands or emigrate from the war-torn country. Throughout his life Peter’s decisions are influenced by his strong family ties and his deep personal faith. Above the Pigsty provides a glimpse into the daily life of one onderduiker (person in hiding) during the Nazi occupation of the Netherlands from 1940 to 1945 and for the first year after liberation by the Allied troops.

PETER VAN ESSEN was born in Apeldoorn, the Netherlands, in 1922. He spent two years hiding on a farm near Aalten from 1943 to 1945 and kept a diary of his experiences. During this time he met Henny Wikkerink whose father, known as Ome Jan, was a leader of the resistance movement. Peter and Henny married in 1947, immigrated to Canada in 1953 and became Canadian citizens in 1959. They lived in Trenton, Ontario for 58 years. Peter now lives in Cobourg, Ontario and continues his hobbies of gardening, painting, writing stories and playing the harmonica.