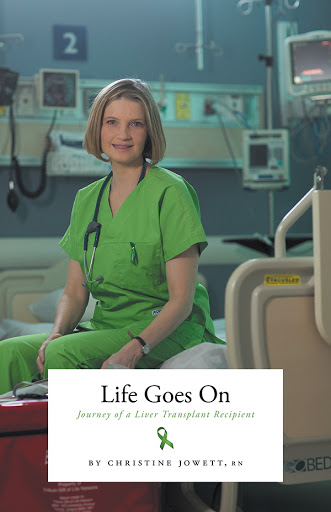 It is a reality that someone in Canada dies every three days waiting for an organ transplant; for some patients, they are lying in their hospital beds, waiting to be given a second chance at life. Some are fortunate to receive that organ or gift of life, yet for many, they don’t survive because the organ they require is either not available or doesn’t get there in time.

Christine Jowett was only thirteen years old when she became jaundiced, fatigued, and endured bouts of right abdominal pain. Having lived with autoimmune hepatitis for twenty-six years, Christine’s disease finally took its toll on her and she ended up in St. Mary’s Hospital, where she works as a cardiology nurse. In order to save her life, she was then sent to Toronto General Hospital to wait for a liver transplant, yet, her situation continued to deteriorate as her kidneys were shutting down.

Now at forty-one years old, a mother and a wife, it still remains a mystery as to why Christine developed chronic autoimmune hepatitis, a disease that for so long through her life she was able to manage with few medications. Life Goes On is a moving story of her life, which tells of her sickness, facing up to the possibility of losing her family, and the struggle to regain the normality of life after her operation. After the tragic death of an anonymous hero, Christine is given the ultimate gift of life, a healthy organ, on one very special day.

"In less than two weeks, Jowett went from working as a nurse to being a patient at Toronto General Hospital - hoping a matching donor would be available in time to save her life." Trillium Gift of Life

Christine Jowett is a registered cardiology nurse at St. Mary’s Hospital. She enjoys being a nurse and helping patients with heart disease and plans on using her nursing background and experience as a transplant recipient to educate others on the importance of the gift of life.

Despite having written many essays and scientific reports for university, Christine never envisioned herself being a writer. However, when she was admitted to hospital for her liver transplant, she began to keep a journal in order to remember the details of her stay, what the doctors had told her, lab results, and so forth. Having continued to keep a journal during her post-op recovery, she was asked by her husband, family and close friends to write the story of her life.

Her transplant story was published in the Canadian wide newspaper “Hospital News” and in her hospital newsletter at St. Mary’s General Hospital in Kitchener. However, it was her liver transplant on July 21, 2013 that led her to write this book, which is an emotional story based on a near death experience.