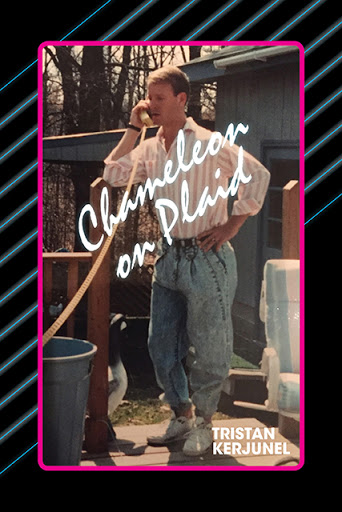 Chameleon on Plaid
by Tristan Kerjunel

Part sex comedy, part historical what-if, Chameleon on Plaid is a racy joyride through the diverse neighbourhoods of Toronto in the late 1980s. It follows a group of bohemian young white men and women in their twenties from various social backgrounds as they take what the city has to offer and attempt to come to grips with their differing roles in an increasingly multicultural and multiracial city. With their lives part intimate play and part exploration of identity, when one among them declares his intention to assassinate a member of the British royal family in the name of Celtic nationalism, the inner group must decide just where its loyalties lie- to the law as it stands or to their friend.

With sly and sometimes wild humour, Chameleon on Plaid takes the assassination plot to old-town Quebec City and back to Toronto in a rich tapestry of language and ideas that pulls the reader from one placid scene into chaos the next and through an aftermath which unfolds in often unexpected ways. Kerjunel’s narrative is both global and local, pulling the reader between the complexities of love and lust, and where we may fit into history or just opt out and create our own. Sometimes in life and in love, realities entwine and sometimes they collide- sometimes they are subject to softsell or hardnosed negotiation and sometimes not so much or not at all.

Tristan Kerjunel is the nom de plume of a Canadian author who has lived and traveled throughout North America and Europe. He has a passion for culture and language and finding the beating heart of urban communities. Before becoming an author, he entertained notions of becoming a zoologist or a French teacher, and has worked in a range of fields including working at a television station, and as a cost consultant in energy, and in marketing and cross-country polling.

He is the author of the upcoming Year of the Monkey, from the Vancouver of 1991-1992, and substantial body of as quite yet-unpublished urban verse and some short stories. He holds a bachelor’s degree in human geography from the University of British Columbia from 1999 and lives in downtown Vancouver with visits to Toronto and elsewhere on the Pacific or Atlantic coasts or interior.