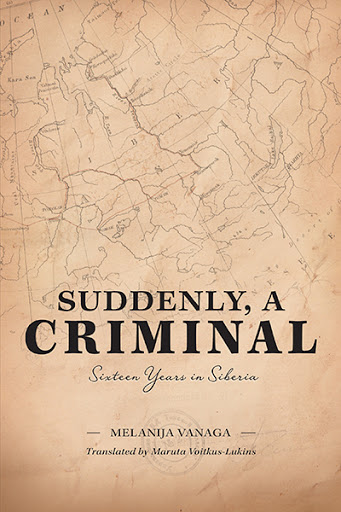 Suddenly, a Criminal: Sixteen Years in Siberia
by Melanija Vanaga

"Those among us who survived," says Melanija, "did so because we were unbelievably full of the determination and will to live, and faith in our ultimate liberation, as well as because all the disasters arose unexpectedly."

From her own and some of her fellow victims' notes and diaries written while the experiences were raw, she portrays an authentic panorama of what ethnic cleansing looked like on the ground during her involuntary Siberian exile (1941-1956). First on an animal collecting station near Tyukhtet when her son Alnis is only nine, and later in the village itself, she and the other women endure homelessness, borderline starvation, extreme cold, humiliation, insult, ill treatment and brutality, and all the while without any knowledge about their husbands' fate, the men having been separated from the women and children already at the first train station where their ordeal began. Add to that, black mud into which one sinks up to the knees, and in Melanija's case, a death's door operation.

Miraculously, some survived, and a few, like Alnis, even ultimately regained a respected position in society.

Indomitable, iron lady Melanija recorded uncounted biographies of those who did not—members of her extended family, neighbours, friends and acquaintances. She filled one hundred and ten large albums in her calligraphic handwriting, supplemented by photographs, and hand drawn maps and pictures.

In Latvia, this documentary became an instant modern classic. In September 2014 it was published in Russian.

The chief subject of the book is, of course, its author Melanija Vanaga. Melanija was a Latvian born in 1905. She was 36 at the time the Communist occupying force arrested and deported her and her family. At that time, she was journalist, farmer and mother. Her husband, too, was a journalist.

The translator, Maruta Voitkus-Lukins, Melanija's junior by 34 years, could well have been on the same train that took the Vanags family to exile. Maruta's family, however, heeded the signs of foreboding during the time of the Molotov-Ribbentropp pact, and managed to insinuate themselves out of occupied Latvia just before the June 1941 deportations. Maruta received a thorough grounding in Latvian culture at a Displaced Persons' camp in Germany, sponsored by the United Nations Relief and Rehabilitation Association. Her family subsequently immigrated to Canada. Equally at home in Latvian and in English, she felt called upon to translate and self-publish this documentary, in the same spirit that her school mate, Vaira Vīķe-Freiberga answered the call to become President of Latvia (1999-2007).