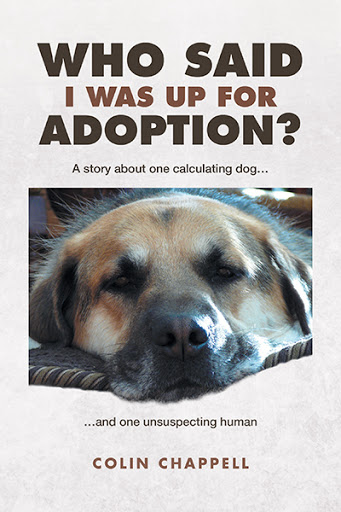 Who Said I Was Up For Adoption?
A story about one calculating dog...and one unsuspecting human
by Colin Chappell

Is there any expression of FRIENDSHIP as endearing as a dog voluntarily touching its nose to yours?

When Colin Chappell contemplated the idea of adopting a dog, he did so warily, for he had seldom spent time with dogs and one of his primary canine experiences came when he was bitten by a German Shepherd at age fourteen. He certainly was unprepared for the complexities of caring for the seventy-five pounds of rescued, furry attitude he encountered in Ray. But perhaps what he was even more unprepared for were the emotions he would feel once Ray invited him to be his friend.

Who Said I Was Up For Adoption? tells the evolving story of this adoption (though it remains unclear just who did the adopting). Funny, heartwarming, and emotional, Colin and Ray’s story is really two stories, for part of learning to let an adopted dog into one’s life is learning to see from a perspective other than your own. True to that knowledge the book is narrated from parallel, alternating viewpoints—Colin’s and … Ray’s!

All net profits from sales of Who Said I Was Up For Adoption? will be donated to the Oakville and Milton Humane Society, a remarkable organization that rescues and rehabilitates dogs (and many other creatures) and matches them with suitable, loving humans. 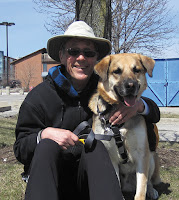 Having always held a soft spot for the proverbial “underdog”, Colin supports a number of charities that focus on homeless youth, those suffering from emotional and mental abuse, and those recovering from sexual exploitation; he has also volunteered in a hospital-based Crisis Intervention Unit where his role was to befriend, assess, and advise— perhaps the perfect training ground for pet adoption.

Ray happily shares his home with Colin in Oakville, Ontario, Canada along with Colin’s partner, Carol, just a few minutes’ walk from his favorite park. The ongoing adventures of Colin and Ray can be enjoyed by following them at: www.meandray.com.