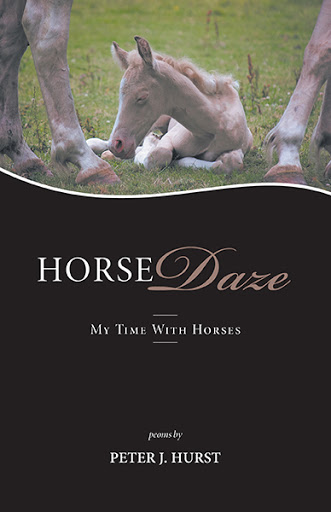 Horse Daze
My Time With Horses
by Peter J. Hurst

Horse Daze is a collection of poems that examines every aspect of a life lived surrounded by horses—trusting, intelligent, and caring animals that will change your life if you let them. With accompanying photos that capture both their majesty and vulnerability, this is a collection that will more than satisfy the interests of anyone who already loves horses, and nurture enthusiasm in those who have yet to discover their appeal.

“Peter Hurst's profound knowledge, experience and love of horses have been captured in this book of poetry, Horse Daze.

His poems reflect his life-long respect, involvement and observation

of horses and the numerous different professionals that are involved

in the horse world. Peter's poetic creativity makes for easy, enjoyable reading for the thousands of people who receive so much pleasure from the horse.”

“Clayborne Farm was established in 1978 and in 1991 we hired Peter Hurst as farm manager. This was the beginning of a wonderful relationship with Peter and Terry that lasted over twenty years until Peter retired to Gabriola Island in British Columbia in May 2012.

Horses were and are Peter's passion in life, his love; not just with thoroughbreds but all breeds.

I am sure all the insight into the horses behaviour and character will come through in his writings.”

Peter J. Hurst was born and raised in England, and his Horse Daze began at a young age. The start to his career was established at White’s Riding Stables. From there his passion for horses took him to Buckinghamshire and The Old Berkeley Hunt, and then to Aston Park Stud, in Oxfordshire. Working professionally with hunters, jumpers, and breeding thoroughbreds, his appreciation of horses only increased, and he knew that he would spend his entire professional life taking care of horses in one capacity or another. After immigrating to Canada, he continued on that path—working at Windfields Farm in Ontario, continuing his work in Alberta, and then, once he retired, settling down on picturesque Gabriola Island, BC, with his wife Terry and their two dogs, Skita and Abbey. It is a wonderful community with many great horse people.

Although retired, Peter’s love of horses still captures his time and imagination, with his website, Cyberfoal.com, which is dedicated to helping orphan foals, and his poetry, which is inspired by horses and the people who care for them.