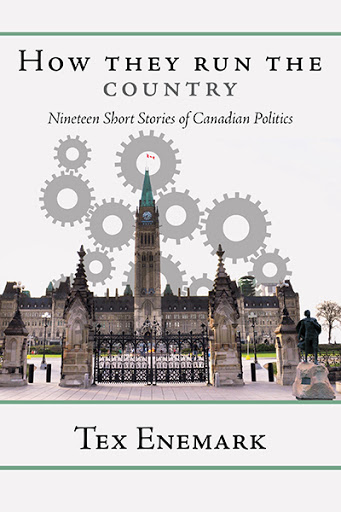 Here are 19 short stories about Canadian politics and government.

These fictional “inside accounts” of political and governmental events, discussions and decisions give the reader an unvarnished view into how Ottawa works. That is, how politicians think, what it’s like to live with the pressures of decisions, and what kinds of issues and preoccupations confront political activists, organizers, prime ministers, governments, elected politicians, their staffs and lobbyists. It covers people trying to do their best for the country, and those less idealistic. The stories go from the recruitment of a candidate, through an election campaign, to appointment to Cabinet then to decline in political fortune, defeat and what happens after. In between are stories about political staff, a lobbyist, an Opposition MP who takes things seriously, and a Government MP that does not, political leadership, and even how a single person missing from a situation changes the outcome.

So the various stories cover honesty and dishonesty, loyalty and disloyalty, marital fidelity and marital betrayal, political wisdom, political stupidity, luck both good and bad, how things might happen, or are planned to happen, are hoped to happen or didn’t happen. Nothing in Government and politics is as simple as it sometimes seems, but sometimes the confusion is deliberate.

For anyone interested in Canadian politics, these stories will inform, amuse, confuse, and beguile you.

Tex Enemark has spent over 50 years in politics and government, as a political activist, campaign organizer, policy wonk, candidate, ministerial assistant, deputy minister, lobbyist, and government adviser. Born in BC and raised in Prince George, Tex joined the Liberal Party in his late ’teens and served on a national executive from age 20. Active while at university while the Liberal Party was being rebuilt during the Pearson years, he went to Ottawa in 1970 after Law School as an assistant to the Minister of Consumer and Corporate Affairs, Hon. Ron Basford. He was the only assistant from BC on a minister’s staff. He moved with Basford to the Ministry of State for Urban Affairs in 1972. After leaving Basford’s staff he joined a public policy consulting firm, and was then recruited to become Deputy Minister in a new Ministry of Consumer and Corporate Affairs in BC where from 1976 to 1979 under Hon. K. Rafe Mair the ministry sponsored 22 pieces of legislation.

Tired of politics and government, after later serving under three incompetent Ministers Enemark fled the provincial government, and was then asked by the Mining Association of BC to be its first President. After four years there he involved himself in some business ventures, but established his own public policy consultancy a few years later.

Throughout, he has immersed himself in partisan politics, and has seen all sides of political and governmental life.

Tex is married to Sandra, and they have three daughters, none of whom have any interest in politics.