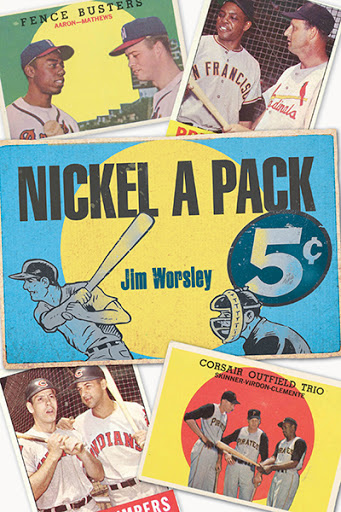 Nickel A Pack
by Jim Worsley

The 1960s is a decade that has stood the test of time. It has been remembered, talked about, embraced, and encapsulated more, by far, than any other decade before or since. The times were a-changin’ in the 1960s and there was much going on. This included the Vietnam War, the British Invasion, the Space Race, the Cold War, the assassination of JFK, Woodstock, and much more.

The decade culminated with the 100 year anniversary of Major League Baseball in 1969. The decade leading up to this milestone was a glorious time for baseball. Previously, the 1950s saw the Negro Leagues wind down and come to an end. The 1960s was the first decade of complete integration, elevating baseball to a supreme level of play and excitement.

It was particularly exciting and larger than life for a young boy absorbing it all through his baseball cards and autographs, as well as playing and watching the game. The author relates his experiences as if he were casually talking to you on your back patio. This is a fun remembrance for people of any age. It’s an enjoyable opportunity to learn and understand how things were back in the “olden days” and, for those of you old enough to remember, it’s a sentimental passage to a simpler time that will evoke many memories.

Jim Worsley has an MBA and has been in the media industry for over 30 years. His career started in radio, migrated to the newspaper industry, and currently places him in television. However, being a baseball historian means more to Jim than any of that.

Jim lives with his wife Ronda in southern California. They have been married for over 25 years. In addition to their shared love of baseball, the Worsleys love animals. They have been animal rescuers for many years.