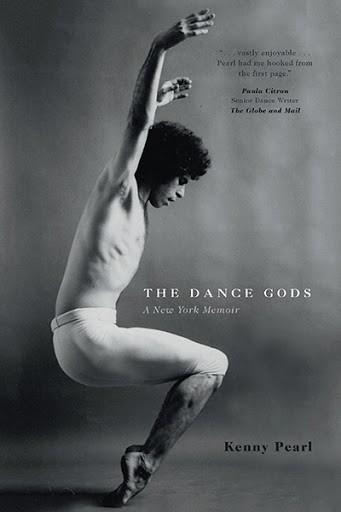 The Dance Gods
A New York Memoir
by Kenny Pearl

When Kenny Pearl arrived in New York City, determined to succeed as a dancer, he was penniless, friendless and jobless. His memories shine against the backdrop of the turbulent ’60s and ’70s, including Vietnam War protests, the military draft and the rampant crime that once plagued the city. From humble beginnings in the hippie-populated Lower East Side, to performing with the greats of the New York modern dance scene—he danced with the companies of both Martha Graham and Alvin Ailey—Pearl’s life is one of tenacity, hard work and passion. This is the engaging story of the hurdles he faced on his unique journey and the remarkable people he met along the way.

“Kenny Pearl’s vastly enjoyable autobiography, The Dance Gods: A New York Memoir, is a candid account of his 13-year stint in the Big Apple. His descriptions of his intimate encounters with both (Martha) Graham and (Alvin) Ailey, two of the world’s great dance icons, are just one of the many pleasures of the book . . . I read the book in one go. Pearl had me hooked from the first page.”

The Globe and Mail

“The Dance Gods is an engrossing look into the life of a dancer in New York City, during the heady decades of the ’60s and ’70s . . . An absolute page-turner and a brilliant tribute to a pivotal time in modern dance.”

“. . . a vivid and absorbing evocation of one dancer’s life . . . offering not only the honest story of his own awakening as an artist but also a series of insightful, sharp-focused portraits of the great artists he worked with . . .”

“Writing with eloquence, wit, and tremendous honesty, Kenny Pearl details his harrowing and exalted path to becoming a dancer . . . I couldn’t put this book down, and I will never forget it.”

Chasing the Tale of

Kenny Pearl began formal training in dance at the age of eighteen in Toronto at the National Ballet School of Canada and with the co-founders of Toronto Dance Theatre. He moved to New York City to train and, subsequently, danced around the world with the companies of Alvin Ailey and Martha Graham. He has taught regularly at schools across North America, including at the Juilliard School of Music, the Martha Graham School and the School of Toronto Dance Theatre. He was Artistic Director of Toronto Dance Theatre from 1983-87 and, since 2002, has held a faculty position at Ryerson University. He wrote Dance/Life, a handbook for emerging artists, in 1990. Kenny lives next to the Scarborough Bluffs in Toronto, where he enjoys gardening, photography and taking long walks.

The Dance Gods has been nominated by our staff as one of their favorite books.