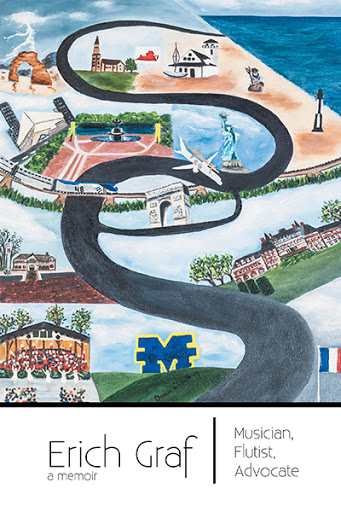 This memoir chronicles Erich Graf’s life as a musician, flutist and musicians’ advocate. His career has comprised a combination of 10 years as a student and free-lance flutist in New York City (seven years as member of the Aeolian Chamber Players), 35 years as principal flutist of the Utah Symphony, including 17 years as President of Local 104, American Federation of Musicians in Salt Lake City. His life is devoted to embracing love for the Arts and advocacy for his fellow Man. Graf was hired as principal flutist of the Utah Symphony in 1976 resulting from an audition for its legendary conductor Maurice Abravanel. Graf became President of Local 104 in 1993.

The author stated that he has endeavored to include in this memoir only those experiences that contributed to his personal growth as a musician that might be interesting and educational to others.

In retirement, he feels that what’s to come excites him because he’s always preferred to be scared rather than bored.

Erich Graf is the former principal flutist of the Utah Symphony. His teachers included Nelson Hauenstein at the University of Michigan, Jean Pierre Rampal at the Académie Internationale in Nice, France, and Julius Baker at the Juilliard School. Previous to the Utah Symphony, Graf performed with the New York Philharmonic and the New Jersey Symphony, among others. Graf appeared many times as soloist with the Utah Symphony. He performed chamber music with Columbia University’s Group for Contemporary Music, the Guarneri String Quartet and the Aeolian Chamber Players. He has performed at Avery Fischer Hall and Carnegie Hall with Julius Baker and Jean Pierre Rampal and in Utah with James Galway. Graf has coached and given master classes in Arkansas, California, Idaho, Illinois, Kansas, Maine, Missouri, New Mexico, Nevada, Oklahoma and Utah. His academic affiliations have included Bowdoin College, CW Post College, University of Utah and Brigham Young University. Graf’s outside interests include physical fitness, cooking, and writing. Mr. Graf also served as President of Local 104, American Federation of Musicians from 1993-2010.